Adrienne Bailon, Israel Houghton’s current wife, is not to blame for his first divorce

After his divorce from Meleasa was confirmed, Israel Houghton married for the second time. However, there have been accusations that Adrienne was the reason for Israel’s first marriage to his first wife ending. Is there any truth to this, though? Is it possible that this story was spread to make him and his wife seem bad in front of his fans and admirers? 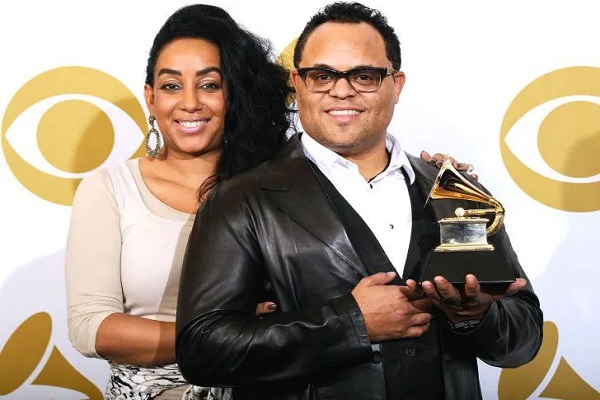 Israel Houghton is now married to Adrienne Bailon, an American singer, actor, and television host. He was previously married to Meleasa Houghton.

There were allegations that Adrienne was the reason for the derailment of the prolific worship leader’s previous marriage because the couple married shortly after Israel’s separation from Meleasa.

Is there any truth to that, though? Was this rumor just a smear campaign aimed at the married couple? Read on to learn more!

The former wife of the ‘I’m With You/Be Still’ singer married him in 1994. Their marriage produced three children: Sonny Houghton, a son, and Lillie and Mariah Houghton, two daughters.
However, the relationship apparently fell apart because to the adultery of the famous Christina musician.

Israel admitted to cheating on Meleasa five years prior to 2016, according to Dailymail, after announcing his divorce from her on Facebook in February of that year.
In addition, his romance with DeVawn Moreno resulted in the birth of two children, Kingston and Khristian. He had an affair with DeVawn while still married to Meleasa, his first wife.
Aside from that, Israel is Jordan Houghton’s father. However, the gospel singer has yet to announce Jordan’s mother.

Because of all of these factors, Israel and Meleasa had lived apart for a long time and struggled to resolve their marital issues. When things didn’t work out, the couple decided to divorce.
In February 2016, the composer of ‘You Are Good’ made the same announcement on his Facebook page. Since then, the post has been removed.

Israel and Meleasa’s 20-year marriage came to an end on February 22, 2016, with a statement released on the same day as their divorce was finalized.

Adrienne Bailon played no role in her husband’s divorce

Adrienne and Israel met in 2013. They collaborated on a few projects together, including the 2013 film I’m in Love with a Church Girl, and remained friends as their circles grew closer.
When the couple made their connection public in March 2016, accusations and speculations about Adrienne being the source of his marital strife began to circulate.
But they hadn’t begun dating right away after meeting. The 49-year-old artist stated several times that he did not go out with his present wife until a few months after filing for divorce.

On March 22, 2016, he wrote on Facebook that his marriage “had been finished for quite some time before going public with my divorce announcement,” emphasizing that Adrienne should not be blamed for his faults.

Adrienne, too, stated that Israel and Meleasa had filed for divorce months before she started dating the famed singer-songwriter during an episode of The Real Daytime in October 2019.

After their divorce was finalized, Israel married the ‘Emmy Award’ winner in a ceremony held in Paris.
On August 12, 2016, the gospel singer proposed to Adrienne, his then-girlfriend, after only six months of dating.

They married a few months later in the same city where they initially got engaged, on November 11, 2016, at the Hotel Plaza Athénée in Paris.

At the moment, the pair is enjoying their married life. They even frequently share photos of each other on their social media accounts.

Related Posts of Adrienne Bailon, Israel Houghton’s current wife, is not to blame for his first divorce