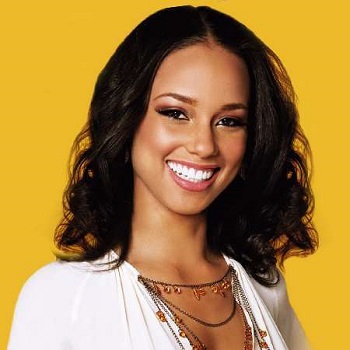 Alicia Keys is a Grammy Award-winning singer-songwriter and one of the most well-known female names in R&B music. Songs in a Minor, her debut album, was certified five-times platinum and won five Grammy Awards. At the age of 13, the successful artist began her career by performing in local clubs and events. She went on to complete her formal education and begin her professional career after graduating from the Performance Arts School. In addition to music, the singer is well-known in the fields of television and film. She has acted in a number of films and television shows. She’s also acted as a mentor and musical coach for a number of productions. From 2011 to 2018, she was a judge on The Voice US. Her humanitarian work, philanthropy, and activism have also won her millions of fans.

Since 2010, Keys has been married to fellow R&B artist Swizz Beatz, and the couple has two children, Egypt Daoud Dean and Genesis Ali Dean.

Alicia Keys was born on January 25, 1981, in New York City, New York, United States of America. Craig Crook is her father’s name, and Terresa Augello is her mother’s. Her mother is a paralegal and a former actress, while her father worked as a flight attendant. She is an American citizen of mixed ethnicity, with Irish, Italian, and African-American ancestors.

Her mother is from the United States, and her father is from Jamaica. She was accepted into the Professional Performing Art School, where she studied choir and graduated as valedictorian. Alicia Keys attempted to continue her studies at Cambridge University, but she dropped out to pursue a career in music.

She didn’t have a happy childhood because her parents divorced when she was young. Alicia Keys was then raised in Manhattan by her single mother.

From a young age, Keys was interested in putting on shows and displaying his talents. She made her first appearance on The Cosby Show when she was just four years old. She began taking piano and dance lessons when she was five years old. Keys had already learned to play classical music, such as Beethoven, when she was seven years old.

Songs and Albums by Alicia Keys

Manager Jeff Robinson first met her in 1994 when she joined his brother’s youth organization. Her first contract was with So So Def Records, but the label never released an album. She later signed with Arista Records and recorded two more songs before releasing her debut album Songs in a Minor in 2001.

The album was a smash hit, selling five times as many copies as it was released. You don’t know my name, Diary, and If I Ain’t Got You” were some of her hit singles.

The album’s music and lyrics were lauded by critics. In 2003, she released her second album, Alivia Keys’ Diary. The album debuted at number one on the Billboard 200 chart in the United States. She also collaborated with Usher on the album’s son My Boo.

With the release of her third album, As I Am, in 2007, she continued her seemingly unstoppable career. The album also charted at number one in the United States, according to Billboard. In its first week, it sold over 740,000 copies. In 2008, she collaborated with Jack White on a new song, Another Way to Die, for the James Bond film franchise, Quantum of Solace. The following year, she collaborated with Jay-Z on the single Empire State of Mind.

Aside from music, Alicia Keys has appeared in a number of films and television shows. She made an appearance on The Cosby Show in 1985 as one of Keshia Knight Pulliam’s friends. She went on to star in several television shows, including Charmed (1996–42), American Dreams (2002-05), and the Backyardigans (2004).

In 2006, she made her acting debut in the action film Smokin’ Aces. Following that, she starred alongside Queen Latifah and Jennifer Hudson in the films The Nanny Diaries (2007) and The Secret Life of Bees (2008). In 2016, Keys performed hallelujah several times on Saturday Night Live.

From 2016 to 2018, Keys served as one of the main judges on The Voice US, a singing reality show. She’s also appeared on Saturday Night Live (SNL), Empire, The Voice Germany, and Landmark Live: Great Performances, among other shows.

A persona with multiple personalities According to Celebrity Net Worth, Alicia Keys’ net worth is $70 million as of July 2018. She has amassed this sum through her successful music, television, and film careers. These days, her net worth is dwindling. Her net worth was $130 million in 2013, but it had dropped to $70 million by 2018.

Keys’ albums have sold over ten million copies around the world. Her husband is also worth $70 million. From one episode of The Voice US, she received a $8 million salary. Keys has also endorsed a number of brands and appeared in a number of commercials.

In Englewood, New Jersey, Keys lives in a lavish mansion. The house is worth $14.9 million and has eight bedrooms, ten full bathrooms, and four half bathrooms. The couple also owns a luxurious Lotus Evora GTE car.

Alivia Keys is a humanitarian with a strong desire to help others. He also participates in a variety of charitable events and movements. She is a co-founder of Keep the Child Alive and has personally raised funds for a variety of causes. She’s also performed in a number of charity concerts. She and her husband have been advocates for the LGBTI community as well as AIDS victims.

Awards and Achievements of Alicia Keys

Due to her musical career, Keys has received numerous prestigious awards such as the Grammy, MTV, and other musical awards. In 2010, she won four awards, including Best New Artist in a Video at the MTV Video Music Awards.

She went on to win 22 awards in 2002. She took home the award for Favorite New Artist. For Fallin, she also won the award for best female R&B vocal performance.

She received 19 awards in 2005. Best Female R&B Vocal Performance and Best Female Artist went to her. The Diary of Alicia Keys was nominated for a Grammy for best album. She won three times in 2006, then 16 times in 2008. In 2014, she won the Grammy Award for Best R&B Album.

Her books, which are available on Amazon, have also earned her a royalty. Tears of Water: Songbook of Poems and Lyrics was her first book, which she published in 2004. In 2014, she co-authored her fourth book, Blue Moon: From the Journals of Mama Mae and LeeLee, with Jessica Walton. The hardcover edition of the book is $15 on Amazon.

Alivia Keys is a married woman with two children. Swizz Beatz, a hip-hop artist, and producer, has been her husband since 2010. The couple dated for quite some time before announcing their engagement in March 2010. During their engagement reveal in May 2010, they also revealed that the couple was expecting their first child.

During the 2010 FIFA World Cup, they held a Zulu ceremony in the Illovo suburb of Johannesburg, South Africa, to bless their unborn child. On July 31, 2010, they married in a private ceremony near the Mediterranean Sea in an intimate ceremony.

In October 2010, the couple welcomed their first child, a son named Egypt Daoud Dean. Genesis Ali Dean, their second son, was born in December 2014 after nearly four years of waiting.

The couple also attends a number of functions and events. They kissed on the BET Awards red carpet in 2016. The power couple has been enjoying their wonderful married life and are still savoring every moment of it.

Swizz Beatz (Kasseem Dean), Keys’ husband, is a hip-hop artist, DJ, and producer. At the age of 16, a New York native began his musical career as a DJ in his hometown. He rose to prominence as a result of his friendship with East Coast rapper DMX and the Ruff Ryders Entertainment record label, as well as his collaborative work with them.

Swizz Beatz is also a fashion designer who joined the popular clothing company Kidrobot in 2003 as a partner. He is also a brand ambassador for Monster GODJ, Reebok, and Lotus Cars. For the song Fancy, he won the Best Rap Performance by a Duo or Group Award in 2011 alongside Drake and T.I. To date, he has released two R&B albums.

In January 2017, a day after Donald Trump’s inauguration, Keys joined a group of celebrity activists including Angela Davis, Madonna, Cher, Scarlett Johansson, and Gloria Steinem at a rally in Washington, D.C.

Height, Age, and Other Facts About Alivia Keys