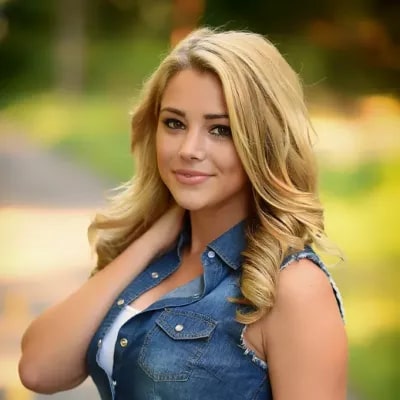 Do you know Who is Amanda Pflugrad?

Amanda Pflugrad is a 31-year-old Scorpio who was born on November 15, 1987, in Oregon, the United States. Pflugrad, an American with an interest in journalism, is most known for his work with the Boston Celtics and The Warshaw Sports Marketing Center. Success in the industry has helped Amanda establish a name for herself, but it also raises concerns about her early years and romantic relationships, which we’ll cover in this article.

Pflugrad is of Caucasian descent, and her brown eyes and blonde hair complement her skin tone nicely.

When it came to her education, Amanda attended the University of Oregon, where she also participated in cheerleading. Amanda is renowned for having a distinctive and elegant style.

Although Amanda is quite open about the majority of her matters, she still prefers to keep some things a secret, as evidenced by the fact that she doesn’t publicly discuss her boyfriend online. This prompted a lot of people to assume that she might be single, although there have been rumors that she’s been seeing William Alexander. Although she has never been married and has never had children, you never know what the future may bring.

One of Amanda’s most well-known jobs was serving as the female studio host at Chicago-based Total College Sports. In that capacity, she interviewed prominent athletes, coaches, and commentators in addition to serving as the show’s host and writer. She also served as the host of the Hulu television series “5th Quarter,” in which she hosted and in which she analyzed college basketball and football games.

Additionally, Amanda was a reporter and host for FOX Sports Arizona. She also contributed to Sun Devil Athletics, where she covered the ASU women’s gymnastics team and had interviews with Grant Hill, Tony Hawk, Jake Plummer, and Jared Allen, among others. Amanda Pflugrad worked as the New York Jets’ insider and team reporter for the 2014–2015 season, doing player interviews on the sidelines, in the locker room, and during games. She covered women’s gymnastics as a sideline reporter for the ESPN/SEC Network in 2018. She also works for the PAC-12 Network as a sideline reporter.

As of right now, Amanda serves as the Boston Celtics’ host and reporter, conducting pre- and post-game interviews with coaches and players as well as providing game analyses and recaps. She further offers daily updates on practices. She is also responsible for presenting the Celtics’ live pregame show before each home game.

So, how wealthy is Amanda Pflugrad as of the middle of 2019? Amanda is reported to have a net worth of $5,000, which she reportedly acquired through her work in the aforementioned industry. She hasn’t mentioned her possessions, including her homes and vehicles, but she appears to be able to sustain herself financially. Her annual income is rumored to exceed $70.000.

She stands 5ft 4ins (162 cm) tall, and based on pictures posted online, she appears to be in good shape and well-groomed when she attends events, which suggests that she takes pride in her appearance.

Pflugrad is active on social media sites like Twitter and Instagram by working in the entertainment industry. She uses her accounts to interact with her followers and to advertise her writing. A tweet she just sent stated, “I just witnessed a Jazz fan boo Gordon Hayward as he walked out on the court and then leaned over to the person next to him and said, “I still adore that guy.” She also included a tweet from the Boston Celtics about Gordon Hayward, one of their players. Additionally, she shared pictures of herself and her friends from a social gathering, which her followers appeared to adore. On Twitter, she has 30,000 followers, and her fan base is expanding.