Amberly Snyder’s Husband: Who Is He? One Error Changed Her Life

Amberly Snyder is a well-known equestrian in the United States. She has gained fame by competing in various horse racing competitions. 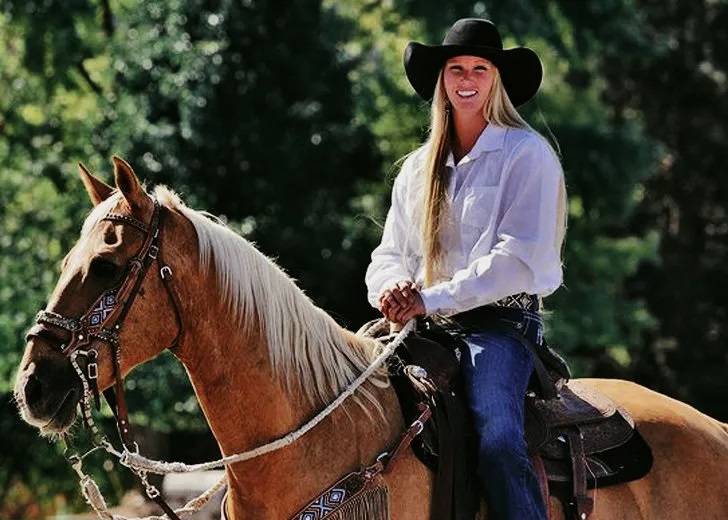 Her life  turned upside down when she was involved in a life-threatening accident that left her paralyzed below the waist. She did not give up hope, however, and began riding horses after only four months. Her life story was later adapted into a Netflix biopic titled Walk, Ride, Rodeo. The passionate rider is currently single and without a husband. Amberley Synder is a well-known American equestrian who was born in January 1991. She rose to prominence as a professional rodeo barrel racer, winning the All-Around Cowgirl World Championship of the National Little Britches Rodeo Association in 2009.
However, she received a lot of attention after her story was covered and turned into a biopic film by Netflix. Amberley’s life-threatening accident and the struggles she faced as an equestrian were depicted in the 2020 biopic Walk. Ride. Rodeo.

The biopic not only revealed details about her trials, but it also revealed a relationship that the cowgirl has yet to publicly acknowledge.

Amberley Synder, a southern California native, was having a good time. In 2009, she had just won the rodeo world championship. She had recently graduated from high school and was planning to attend college. On top of that, she was preparing to be the Utah FFA State President. All of this happened when the cowgirl was only 18 years old, and the rest of the world was still ahead of her.

All of that change one fateful day when the prodigy was hit sideways. Amberley was driving to the Denver Stock Show and Rodeo on January 10, 2010. She took every safety precaution, but after stopping and filling the gas tank, she forgot to put on the safety belt, which proved to be the most fatal mistake she ever made.

She looked down for a second to check the map as she drove through Sinclair, Wyoming. When she looked up again, she realized she was in the wrong lane and her car was heading straight into a metal beam. When she realized this, she swerved back into the right lane to avoid colliding with the metal beam. Unfortunately, her vehicle slid off the road and rolled, causing her to be ejected from the vehicle and slammed into a fence post.
The doctors were able to save her after a five-hour emergency surgery. But there was more to it. Because of the impact she received when she was slammed into the fence post, the doctors predicted that she would never feel anything below her waist.

Almost no one returned after being involved in such a serious accident and being paralyzed below her waist. Amberley Snyder, on the other hand, was able to return to horseback riding after only four months.

Amberley did not give up on horseback riding and competing after the accident and decided to undergo physical therapy to help her balance in the saddle. But it wasn’t easy either. She felt strange and broke down the first time she rode her horse. That experience was so traumatic for her that she decided to sell all of her horses.
Amberley forced to change her mind because her mother, Tina Snyder, refused to accept Amberley’s decision. Her entire family — her father, mother, and five siblings — eventually began to motivate and cheer her up. Amberly felt inspired to ride horses again as a result of the positive energy surrounding her. She then retrained her horses so that they could understand her commands through her voice and hands rather than her legs. She hasn’t given up hope and is eager to face new challenges since then.

Amberley persevered, completing her Bachelor’s degree in Agriculture Education in May 2015 and her Master’s degree in School Counseling in 2018.
In terms of her horse-riding career, she has competed in various competitions across the western United States since she re-entered the saddle. She even chosen as a fan exemption to compete in the world’s richest one-day rodeo, RFD-The TV’s American, in 2015. Amberley finished 19th in the barrel race with a time of 15.369 seconds.

Amberley Snyder, a passionate horse rider, has yet to exchange wedding vows with a husband. When her biopic, Walk. Ride. Rodeo., was released, it sparked speculation about her marital status. Amberley was shown in the biopic to have a love interest named Tate Watkins. Watkins real name was changed for the film.

Amberly Snyder, on the other hand, has yet to speak on the subject. She has also not made any public statements about who she is dating, implying that she is currently single.

Related Posts of Amberly Snyder’s Husband: Who Is He? One Error Changed Her Life