Amy Allan met her husband while working on the set of ‘The Dead Files.’ 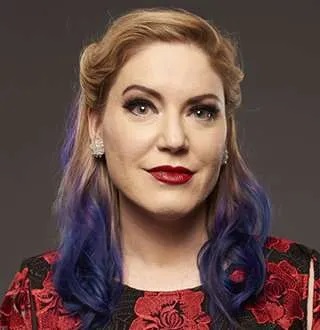 Amy Allan, an American paranormal psychologist, has a typical love life. She met someone she adored, married him for 12 years, and when things didn’t work out, she divorced, got over him, met another man, and made him her husband.
The Colorado native is best known for her role on Travel Channel’s The Dead Files as a paranormal investigator and physical medium (people who can communicate with spirits).

We present to you the life of America’s most popular paranormal investigator and her husband.

1. Amy Allan’s Life in a Nutshell

Allan, who was born on May 31, 1973, in the mountainous state of Colorado, was allegedly tormented by “shadow people” when he was four years old. Her interest in paranormal activities and psychology was piqued as a result of this.

Allan later earned a bachelor’s degree in psychology from the University of Arizona and received training from world-renowned paranormal psychologist Dr. William Roll.

To communicate with the paranormal, Allan claimed she possessed the abilities of a medium, which has been investigated by some of the world’s top parapsychologists.

2. Amy Allan attained the pinnacle of her career as a paranormal investigator on ‘The Dead Files.’

Allan has worked with police departments and private investigators to conduct investigations for individuals and businesses, utilizing her abilities as a medium.
The Travel Channel’s paranormal TV series The Dead Files, in which Allan collaborated with NYPD homicide detective Steve Di Schiavi to investigate allegedly haunted locations, was what first brought her to the public’s attention.

The series aired for ten seasons (180 episodes) and presented a plethora of evidence pointing to paranormal activity.

3. Amy Allan met her husband, Rob Traegler, on the set of ‘The Dead Files.’

Allan was enamored with more than just the paranormal. Rob Traegler, a television and film director, came to work on The Dead Files in 2011, just as it was about to premiere. Allan and Traegler did not start dating right away, but once they did, they did not stop. Traegler married Amy Allan on October 31, 2018—their wedding day—after six years of dating. So, to those who are wondering, “Is Amy Allan married?” or “Who is Amy Allan’s Husband?” Amy Allan and Rob Traegler have been married since 2018.

4. Despite not speaking with her ex-husband since their divorce, Amy Allan once worked with him.

Prior to Rob, Allan was married to Matthew Anderson. Matt had been her husband for 12 years, but things didn’t work out for some reason, and they divorced. Although Allan never spoke to her ex-husband after the divorce, she did meet with him once for one of the shows she was producing. Allan’s life motto appears to be simple: keep it simple. She was with Anderson as long as she was happy with him. She divorced him and severed all ties as soon as she realized she couldn’t be with him. Then she found someone else to be with, Traegler, and has been with him ever since.

It is one of the straightforward approaches that has made Allan’s personal life so successful and happy.