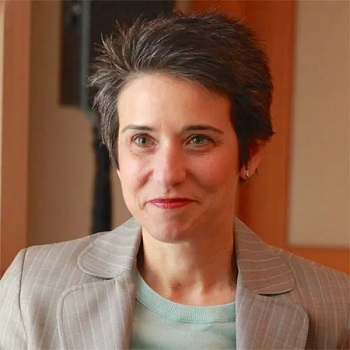 Amy Walter is a political analyst and journalist from the United States. She is currently a national supervisor for the online newsletter ‘The Cook Political Report.’ She is a lesbian who is married to Kathryn Hamm, an American author.

Walter has also been featured in a number of publications, including The New York Times, The Washington Post, and The Wall Street Journal. Andrea Mitchell Reports, the Chris Matthews Show, and Meet the Press are just a few of the MSNBC programs where she has appeared.

Walter was a part of CNN’s Emmy-winning election coverage in 2006. She was also given the Crystal Ball Award by The Washington Post. Furthermore, Washingtonian magazine named her one of the top 50 journalists in DC.

Walter, who is 48 years old, is married but has no children. She is currently based in Arlington, Virginia. On November 2, 2013, she married Kathryn Hamm. Kathryn, her spouse, is the publisher of GayWeddings.com and the author of a book about same-sex marriages.

According to some web accounts, the two met in 1993 through a mutual friend. In their lives, the pair has been married twice. On Labor Day Weekend in 1999, they married for the first time. On November 2, 2013, they married for the second time in Washington, DC. During that time, same-sex marriage was not legal in the United States.

Caleb, the couple’s adoptive child, according to some websites. They married again in 2013 after American legislation became more accepting of the lesbian, gay, bisexual, and transgender (LGBT) community.

According to various web sources, Amy Walter’s estimated net worth is $4 million and her annual salary is around $350,000. However, it has not been confirmed by the authorities.