Antonia Lofaso’s recent appearance on ‘The Bachelorette’ has sparked speculation that she is dating following the loss of her spouse Heavy D. 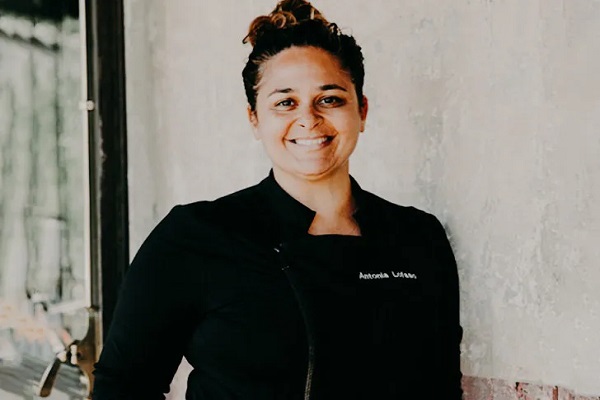 The death of Antonia Lofaso’s rapper partner Heavy D caused a lot of sorrow in her life, especially because their daughter was just 11 years old at the time.

That unfortunate occurrence did not deter her from pursuing her vocation. Her appearance on the 16th season of the dating reality show The Bachelorette, however, generated news.

Many people wondered if she was back in the dating world nine years after her partner died.

Has the celebrity chef been linked to a prospective love interest? Continue reading to find out!
Fans thought Lofaso was finally dating after her appearance on ‘The Bachelorette.’

The renowned chef made a quick appearance on The Bachelorette’s sixteenth season episode on December 15th. However, that was enough to enrage supporters of both the show and the chef.

After one of the program’s top candidates, Ben Smith, took the 16th bachelorette Tayshia Adams on a hometown date, she was cast in the show. The chef’s presence, however, was not as sensational as some would have you believe.

Smith informed Adams prior to the possible couple’s date that she would be meeting Antonia for a stimulating date at the Quinta Resort & Club in Palm Springs.

Smith remarked, “As I previously stated, my life is full of strong, determined, bold, independent women, and the two women you’ll meet today are two of my favorites — a very close family friend, Antonia, who is with me more than anyone else. And you and she have an uncanny resemblance.”

Lofaso and Smith have a long history together, and the two have been on each other’s Instagram multiple times over the years.

“Happy Birthday Antonia, I love you very much,” Smith captioned a video with the chef in November 2020. “I appreciate you for being who you are.” However, the message has been removed from his account as of May 2021.

Lofaso trains at Smith’s gym, Deuce, in addition to being a close family friend

And the connection between Lofaso and Smith, as well as her attendance on the show, drove fans insane, leading to rumors that the two had dated in the past.

“Is nobody going to bring up the fact that Ben’s family friend is FOOD NETWORK’s ANTONIA LOFASO?!?! #TheBachelorette,” one fan commented on Twitter.

Before any affair, her inexplicable love for her daughter comes first

Despite reports that she is dating a potential partner, Lofaso has remained unmarried (at least officially) since her boyfriend’s death in 2011.

To clarify, Lofaso and Heavy D never said if they were married or husband and wife, but it was always clear that they were partners and parents to their daughter, Xea Myers.

Despite the fact that Heavy D died when her daughter was only eleven years old, the renowned chef has spoken about receiving a lot of aid from his family in raising her daughter, who is now 21 years old.

Despite having a lot on her plate, including her two restaurants and running Black Market Liquor Bar, Lofaso makes time for her daughter.

She never forgets her priorities as a mother, prioritizing her kid over her passion for cooking and any potential personal relationship.

She frequently posts pictures of her baby on Instagram, as well as updates on major occasions in her daughter’s life.

Furthermore, Lofaso does not require a special occasion to post her daughter’s grins on Instagram. She is always uploading images of her daughter, thanking her for simply being there.

When it comes to sharing moments with her mother, her daughter Myers isn’t far behind. She also frequently shares photos of herself and her mother, ranging from the most mundane to the most memorable occasions.