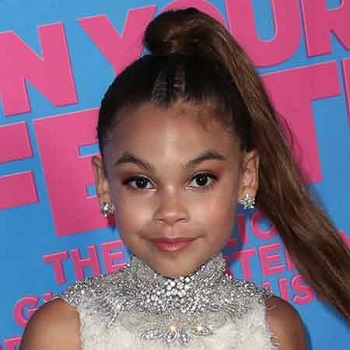 Ariana Greenblatt is an American child actor best known for her role as Daphne Diaz on the television show Stuck in the Middle. In 2015, she made her television debut in a guest-starring role on Liv and Maddie. Her career was thrust into the spotlight in 2018 when she starred as a young Gamora in Avengers: Infinity War.

Ariana Greenblatt was born in New York, on August 27, 2007, under the Virgo zodiac sign. Her ethnicity is Hispanic and her nationality is American.

In 2015, Ariana Greenblatt made her acting debut as Raina in Disney Channel’s comedy-drama series Liv and Maddie. The next year, she appeared as a guest star on Legendary Dudas, an American teen comedy series.

In 2017, she starred alongside Mila Kunis, Kristen Bell, Kathryn Hahn, and others in the American Christmas comedy film A Bad Moms Christmas.

Since 2016, Greenblatt has been portraying Daphne Diaz in the American comedy series Stuck in the Middle. Kayla Maisonet, Isaak Presley, Ronni Hawk, and others star alongside her. She’s also appeared in Marvel’s Avengers: Infinity War and A Bad Moms Christmas, among other films. She also played Julia in the animated comedy film The One and Only Ivan, where she voiced the character.

Ariana Greenblatt’s Salary And Net Worth

Ariana Greenblatt’s net worth is estimated to be around $250 thousand at the moment, as she is still in the early stages of her profession. Her earnings are primarily derived from her appearances in television shows.

Ariana Greenblatt, who is 12 years old, is too young to be in a love relationship. She is a teenager who is focused on her education and profession. Greenblatt currently resides in Los Angeles, California, with her parents. She enjoys trying new foods, acting, and spending time with her close friends. Foxy, her pet, is also one of her possessions.

Her body structure is petite, with a height of 4 feet 1 inch and a weight of 35 to 40 kilograms.