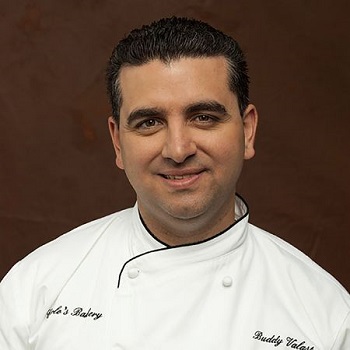 Buddy Valastro is a celebrity chef, entrepreneur, cake designer, and TV personality who was born in the United States. He is best known for hosting the reality TV show Cake Boss and its spin-off Kitchen Boss. Similarly, the multi-talented personality has written two Cake Boss books and produced The Next Great Baker, his spin-off show.

Buddy Valastro was born in Hoboken, New Jersey, on March 3, 1977, to Mary Valastro and Bartolo Valastro, Sr. He is of Italian ancestry and is Italian-American by nationality.

Buddy is the owner of Carlo’s Bakery, which is featured on the reality TV show Cake Boss, as well as the head baker. Carlo’s has since opened 17 more bakeries in places like Hoboken, Marlton, Morristown, Red Bank, Ridgewood, Wayne, Westfield, and others, thanks to the show’s success.

Buddy and The Pound Bakery also collaborated in 2018 to redesign and launch a new line of pet treats. Valastro also collaborated with a number of companies under the Buddy Valastro Foods brand to release a full line of readymade fondant, Italian Biscotti cookies, icing, and buttercream in the same year.

Buddy Valastro has a net worth of $10 million, which he accumulated primarily through his work as a baker. He is one of the wealthiest celebrity chefs in the world, according to Celebrity Net Worth.

As the official brand ambassador for the new line of zero- and lower-calorie sweeteners, Valastro earns a sizable salary. In addition, he earns hundreds of thousands of dollars as a host, judge, and television producer.

Buddy Valastro, one of the wealthiest chefs, married Lisa Valastro in 2001, but the exact date of their wedding is unknown. For the past 18 years, the couple has had a happy marriage.

Buddy made headlines in 2014 when he was arrested for DUI. Valastro’s driver’s license was then suspended for 90 days and he was fined $300.