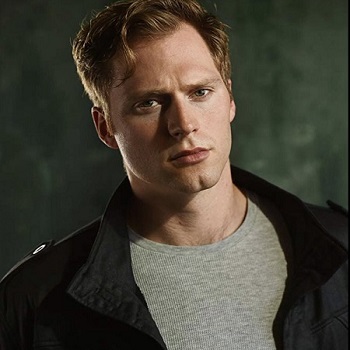 Calahan was born on May 13, 1993, and as of 2021, he is 28 years old. His parents, Wade Skogman and Stefani Skogman raised him in Green Bay, Wisconsin, the United States of America.

To commemorate his parents’ 31st year of marriage, the actor shared a photo of his parents in late May 2020. He has a younger sibling who lives with him.

Calahan is of American heritage, but his background is mixed, with Nordic and Italian ancestors. He attended Seymour High School before going on to the University of Wisconsin. He studied acting at the University of Southern California and earned a Master of Fine Arts in Acting.

Calahan stands 6 feet 4 inches tall and has a muscular physique.

Calahan has performed in a number of plays during his academic years, including Julius Caesar, Children of the Sun, Eurydice, The Metal Children, and Catch Me If You Can, among others.

However, in 2017, the actor made his theatrical debut in the short play G. I. Jose. The next year, he starred in the film Smile as the lead. He starred in the 2019 film Blood Puppet! Christmas ’94. He is set to appear in Shadow and Bone in 2021.

Calahan Skogman’s net worth is estimated to be approximately $350 thousand in 2021.

Calahan has remained tight-lipped about his personal life, including the status of his current relationship. He has uploaded multiple images with Danielle Galligan, his on-screen partner while browsing through his Instagram.

Calahan and Danielle have both shared photos of themselves with him on social media. They’re an on-screen pair, but it’s unclear whether they’re dating in real life as well.