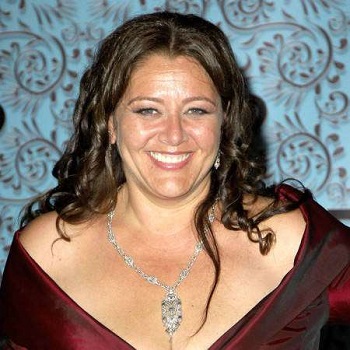 Camryn Manheim is an American actress best known for her roles as Ellenor Frutt on ABC’s The Practice, Gladys Presley in the mini-series Elvis, Delia Banks on CBS’s Ghost Whisperer, and ‘control’ on Person of Interest.

Camryn Manheim was born on 8th March 1961 and is currently 57 years old. She grew up in Peoria, Illinois after being born in Caldwell, New Jersey. She is the daughter of Jerome Manheim; a math professor and Sylvia; a teacher. She is white and of American descent.

Camryn became interested in acting at a very young age after working at a Renaissance fair in high school. She received a BFA from the University of California, Santa Cruz in 1984 and an MFA from the Tisch School of the Arts Graduate Acting Program at New York University in 1987.

Camryn Manheim worked as a sign language interpreter in hospitals for a time, and her sign language skills were featured on The Practice, in one of Law & Order’s episodes, and in the film, Mercury Rising.

Family Guy, How I Met Your Mother, Two and a Half Men, The L Word, Chicago Hope, Hannah Montana, and other shows are among her many television appearances. She even voiced Juliet in one of the episodes of Dilbert on UPN.

The Laramie Project, Dark Water, Scary Movie 3, Romy and Michele’s High School Reunion, An Unfinished Life, and Happiness, for which she and her co-stars won a National Board Of Review Award for Best Acting by an Ensemble, are among her other films.

In her private life, Camryn Manheim is a proud mother to a son named Milo. The identity of Milo’s father has always been a mystery to the public. Rumors began to circulate when Milo was five years old in 2005, claiming that male model Jeffery Brezovar was the child’s biological father. Later, Jeffery clarified that he was merely a sperm donor who had donated sperm to a celebrity mother. There is no official confirmation about this news.

The Primetime Emmy award-winning actress, Camryn Manheim has to deal with weight issues for a long period of time. Her book named Wake Up, I’m Fat! also deals with the same issues. Her dramatic weight loss made headlines again in 2007.

Rumors said that she has gone through plastic surgery but later on, she denied the fact saying that “It was really a change in lifestyle, wanting to have healthy food in the house so my son learned how to eat well”.

Camryn Manheim’s marvelous performances in different movies and television shows have always been praised by a lot of critics and fans as well. But even though Camryn Manheim has a $3 million fortune, her salary has not been reported in the media. She is a 5’10” actress with a weight of 55 kg who is devoted to her craft. Her body measurements are 38-31-37 inches. Her bra size is 42D.