Carrot Top refutes claims of plastic surgery, claiming that the before and after changes are the result of working out.

Scott “Carrot Top” Thompson, comedy’s King of Props, had to deal with a lot of plastic surgery rumors and before and after images. Despite hundreds of sources claiming he had surgery to improve his appearance, the comedian insists he hasn’t had any work done on him. 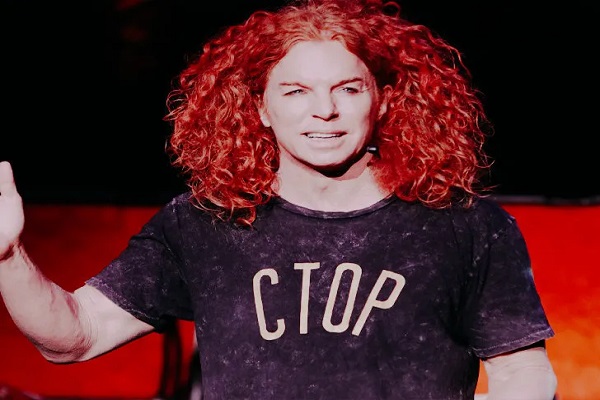 Scott “Carrot Top” Thompson is a well-known comedian from the late 1990s and early 2000s. Aside from comedy, one of the most talked-about subjects whenever Carrot Top is mentioned is his appearance, with discussions raging about whether he had plastic surgery or not.

Despite the fact that several outlets have attempted to investigate his transformation and provide a solid response to the subject, the comedian himself has denied all reports of having undergone plastic surgery to alter his appearance.

Carrot Top claims that he has never had any cosmetic surgery

For decades of years, comedian Top has faced with plastic surgery rumors and before-and-after surgery photos.

Many others compared his metamorphosis to plastic surgery disasters, and some experts even weighed in. Dr. Anthony Youn, a leading plastic surgeon, believes the comedian may have had laser treatments or chemical peels. Top’s appearance, according to the Dr., is more akin to a muscle-bound cartoon character.

Despite the allegations, the comedian has stepped out on several occasions to deny having any work done.

The Florida native described the plastic surgery claims as “crazy things” he had read about himself in a 2015 interview with Florida Today. He also addressed the rumors that he was on steroids.

“It all started when I did a Comedy Central Roast, and they decided it would be great to pick on Carrot Top. I have mellowed out now, but for a while I had gotten really big. I didn’t do steroids or anything, I just worked out a lot, and I never had any plastic surgery.”

He went on to say that the claims were incorrect and that the rumors arose mainly because he had grown large after a lot of hard work.

“I can see why people would think that since I got really big for a while, but I never had any work done. I mean, if I was going to have plastic surgery, I would look better than this! My crew, my family and my friends all know I work so hard and I wouldn’t have had any time to get work done if I wanted to. That was absurd.”

And, given that he was performing hundreds of gigs each year at the height of his fame when the claims first surfaced, his remarks seem reasonable.

He will be performing at the Luxor Hotel and Casino

Chairman of the Board’s star has been in the comic profession for three decades, having made his debut television appearance in Comic Strip Live in 1991. And, while he doesn’t make the news as frequently as he used to, he’s far from done with his profession.

With his prop-filled acts, the comedy’s King of Props has been luring fans and comedy aficionados to his residency at the Luxor Hotel and Casino in Las Vegas since 2005. He still performs around 300 shows every year, with numerous celebrities in attendance.

For a long time, the stand-up comedian has been dating Amanda Hogan. It’s unclear when the two started dating, however she appeared in a Where Are They Now video for Top on the Oprah Winfrey Network in 2013.

The pair frequently shares photos of themselves and their dog Boo Bear on social media. For example, while performing Randy Travis’ ‘Forever And Ever, Amen,’ the comic wished her a happy birthday in August 2020. “Happy birthday, honey,” he said at the end of the video, referring to her as his “best friend in the whole wide world.” “I adore you.”

Related Posts of Carrot Top refutes claims of plastic surgery, claiming that the before and after changes are the result of working out.