The talk show host Chad Dukes has kept his wife and personal life a closely guarded secret. On rare occasions, however, the RJ mentions his wife in his posts. Dukes stated in one of these posts that marrying his wife was the best decision he had ever made. 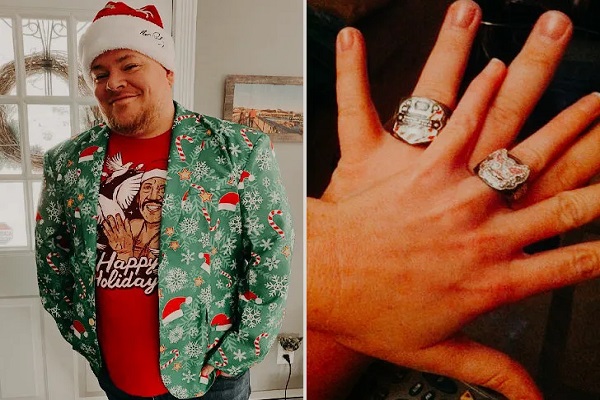 Chad Dukes has kept his wife’s and their personal lives a closely guarded secret. On rare occasions, however, the RJ posts small details about his missus on his social media account. Dukes stated in one of his posts that marrying his wife was the best decision he ever made.

The Best Decision I’ve Ever Made

With an adorable Instagram post on July 21, 2018, the RJ marked his sixth wedding anniversary. On either of the couple’s ring fingers, the post featured a pair of prominent yet unconventional wedding bands.
While Dukes reminisced in the captions about how he married the love of his life six years ago on that very day in a little house in Fairfax with an alligator head on the front porch.
RJ, who is notorious for his secrecy, went on to say that after the wedding, they drove to Blue Ridge Seafood to have lunch with their respective brothers.

To close the captions, the ecstatic husband admitted that marrying his wife was the best decision he’d ever made.

The couple married on July 21, 2012, according to this post, and the RJ has tagged their store, Commonwealth Dry Goods, in the photo.
Daisy, according to sources, is his wife’s name, and the couple has been dating since they were very young, according to one of his tweets, which has since been deleted.

‘The Chad Dukes Show’ is born

Dukes, who has been on the radio for over 15 years and has millions of fans around the world, has finally decided to launch his own website.

After being accused of making racist remarks, the RJ was fired from 106.7 The Fan in October 2020. There is currently no information available about the exact statement that resulted in Dukes’ firing. People on Twitter and Reddit, however, have speculated that Duke was fired because of his comments about racial-justice protests and how the NFL handled them.
Currently, the radio personality hosts The Chad Dukes Show, which is a radio podcast. The podcast, which debuted on January 1, 2021, covers a wide range of topics including movies, food, football, fighting, video games, and much more.