Taylor’s girlfriend Keller, a low-key stunner from Hawaii, has swiftly gained a following. 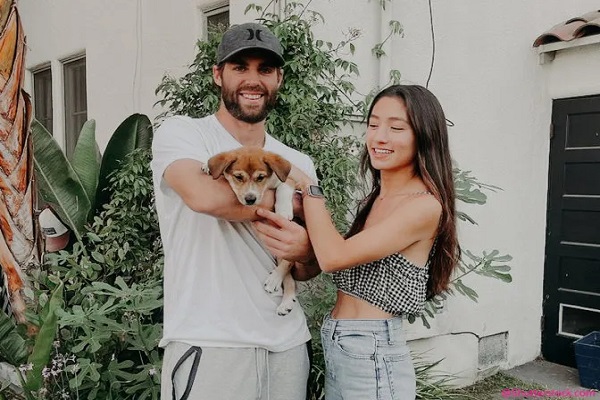 Due to COVID-19 restrictions, fans were unable to see this fantastic season, but they were delighted to a ring ceremony earlier this year.

The lifting of these restrictions, as well as the ensuing ceremony, was a therapeutic experience for both players and spectators, as they were finally able to enjoy their victory in person.

While the Dodgers’ season was full of inspiring and, at times, contentious moments, one of the more intriguing subplots was utility guy Chris Taylor, who started every game of the World Series and hit.217 in 24 plate appearances.

After becoming the first player from the University of Virginia to play in both the College and Major League Baseball World Series, Taylor was inducted into the Virginia Baseball Hall of Fame.

During the ring ceremony in April, Taylor received a message from his former college coach Brian O’Connor. According to O’Connor,

“To see his development as a major league player and have so many opportunities to win a World Series and then finally get one last night was awesome. His contributions to that team were great this season.”

Following his regular match-winning performances last season, Taylor drew a lot of attention. As a result, his personal life has been brought to light, particularly his relationship with Mary Keller.

The couple walked the purple carpet together as Taylor arrived at Coors Field in Denver, Colorado for the All-Star Game on July 13.

The couple addressed themselves to the cameras in a post by the LA Dodgers, with Taylor speaking poorly and Keller seeming nervous.

Taylor’s mother also shared a photo of herself and her husband with the young newlyweds later that day.

She shared a series of photos of herself and Taylor trekking with Hendrix, her beloved pet dog.

Keller went to the World Series game that Taylor gave later in the year. As they kissed through the nets, the couple showed that they were not scared to show their love in public.

Taylor only mentioned Keller in March 2021 in a “far overdue girlfriend (and Hendrix) appreciation post,” whereas Keller posted photographs of their kiss on October 29, 2020.

The couple traveled to Keller’s hometown of Honolulu, Hawaii, during Taylor’s off-season. Keller posted a photo of the couple on a beach in Oahu walking together.

Keller works at Russ, August & Kabat as a Media & Entertainment Associate. She earned her Juris Doctor degree from the University of Southern California in 2017.

Burnham is dating Lorene Scafaria, a fellow film director and screenwriter who is more than a decade his senior. Since 2013, the couple has been in a relationship.Age is only a number for American
Read More
December 12, 20210

Andy Mauer has been in a relationship with his girlfriend for nearly two decades... The romance only uncovered after a blog called...share a beachfront condo in...a Talent Acquisition Director's typic
Read More