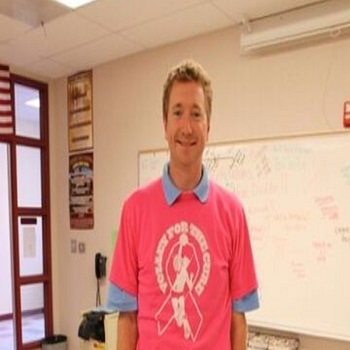 Christopher Castile is an American actor best known for his roles in the films Beethoven and Beethoven’s Second. He is well renowned for his part in the television series Step by Step. Following the cancellation of Step by Step, he stopped acting. He is currently employed as a political science professor at Biola University in La Mirada, California, as well as a U.S. history teacher at Downey High School.

Christopher Castile was born on June 15, 1980, in Orange County, California, under the sign of Gemini. He has a sister named Bethany Castile and is the son of Donna Castile (mother) and Jon Castile (father).

He enrolled in Brethren Christian High School for his education. Later, he earned a Master’s degree from a college in southern California.

In addition, he holds a pilot’s license. “Being You is Most Definitely Cool,” he said in his memoirs.

He stands at six feet and one inch tall.

Alison Castile, his wife, is his personal life.

Christopher Castile is a 40-year-old married man. He and his wife, Alison Castile, exchanged wedding vows. They became engaged in 2002, according to some trustworthy accounts, and later married. However, the specifics of their love lives and marriage have yet to be revealed.

The couple has two children, but no information on their children is accessible. The four-person family is currently residing in California.

How much money does he have? In a Nutshell!!!

Christopher Castile has a net worth of $1 million as of 2021, thanks to his acting and teaching careers. He may be compensated in the same range as the actor in the United States, who earns roughly $57000 per year.

In 1990, he made his acting debut in the film My Two Dads, in which he played a minor role. He was cast in numerous films in the same year, including The Fanelli Boys, Hurricane Sam, and Empty Nest. His career took off once he was hired as Mark Foster in the television series Step by Step (1991-98).

Here is a list of his films that have grossed a lot of money at the box office.

Going Places, The Family Man, ABC TGIF, Empty Nest, and Step by Step are some of his major works. In the 1995 film Are You Afraid of the Darl? he played Jason. Hey Arnold! was his most recent television appearance (1996-97).

He began working as a lecturer at Biola University after retiring from performing.