Dana Carvey and his wife raised their children in a non-Hollywood environment. 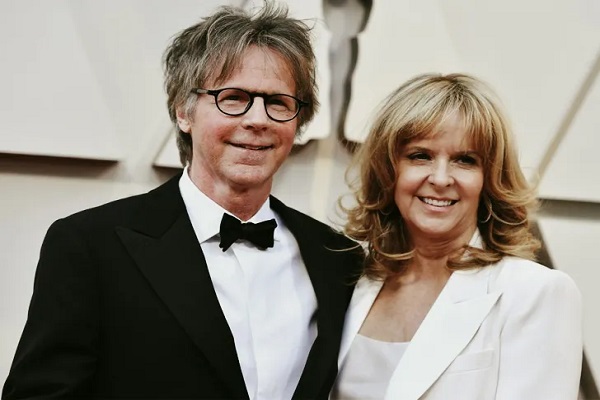 Dana Carvey, an American stand-up comedian, actor, and producer, is happily married. He and his wife, Paula Zwagerman, have been married for more than 37 years.

They are the proud parents of two kids, Dex Carvey and Thomas Carvey, in addition to being a married pair. He took a sabbatical from Hollywood once his children were born and shielded his children from the spotlight. But why did he make such a choice?

He didn’t want to abandon his children

Dana was at the pinnacle of his profession in the 1990s, to the point where he had to leave his house for months.

He found it strange to entrust his children to a nanny. As a result, the actor took the kids to whatever set he was working on at the time.
The comedian once brought his kids to the set of the film Trapped in Paradise. In an interview with Looper, he explained that he was unable to leave them due to illness.

“One son had a lot of ear infections, and the other one got the flu. I’d sleep a few hours, and then I was trying to entertain one of my sons in the basement by pushing this cart around.”

He found it inconvenient to take his children to the settings. Carvey described an amusing occurrence in a 2009 interview with AV Club. During the filming of Wayne’s World 2, one of his sons approached him, implored him not to retain his strange hair, and cried.

Those two experiences made him realize how important it was for him to devote his entire attention to his family. As a result, he took a sabbatical from Hollywood and moved his family to Northern California.

His sons are following in his footsteps

Despite taking his boys, Dex and Thomas Carvey, away from Hollywood and the spotlight, the Wayne’s World star displayed an interest in stand-up comedy.

When Carvey realized his boys’ talent, he returned to Los Angeles and assisted them in launching their own comedic careers.

He is now extremely proud of his sons and constantly updates on their progress. On December 2, 2016, for example, the voice actor for The Secret Life of Pets tweeted a video of his son Dex from his Netflix special presentation.

Meanwhile, Dana and his two sons were spotted on stage at The Ridgefield Playhouse on September 12, 2018, for The “Humans Are Fantastic” tour, which is part of the Barts Tree Service Comedy series.

Dana’s sons, Dex and Thomas, are Twitch streamers in addition to being comedians. The Carvey Brothers is their united Twitch channel. Dex has also been a Twitch.TV partnered broadcaster since 2017.

Carvey has had two marriages

Dana was her birth name. Thomas Carvey, an American actor and comedian, has exchanged wedding vows twice. In 1979, he married Leah Carvey for the first time. They split up in 1980.

Dana married his now-wife, Paula Zwagerman, in 1983, three years after his divorce from his first marriage. The duo has always been together since then.

Paula, Dana’s wife, is frequently seen with him at award presentations such as the Annual American Comedy Awards and the Academy Awards. They attended the 91st Annual Academy Awards on February 24, 2019 in Hollywood, California.
Dana’s decision to leave Hollywood to focus on his family paid off when his children expressed an interest in becoming comedians.

Related Posts of Dana Carvey and his wife raised their children in a non-Hollywood environment.