Tom Morello, a Grammy-winning musician, and his wife Denise Luiso are striving to instill vital values in their two sons. 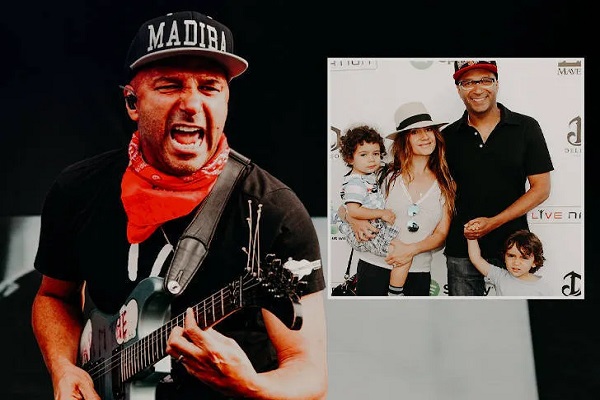 Tom Morello has established himself as a guitar virtuoso for Rage Against the Machine, collecting Grammy Awards and garnering awareness as a political and social activist. Now, as a father, he is instilling these same principles on his boys Rhoads and Roman, whom he shares with Denise Luiso.

Morello and his loved ones

Morello is the son of Mary Morello, a powerful schoolteacher, and Ng’ethe Njoroge, a former Kenyan diplomat. The singer was born into a powerful family with many members of his family serving in the Kenyan government. His father disowned him when he was only 16 months old. In the little town of Illinois, he was reared by his single mother.

Denise Luiso, his wife, and he married in 2009. She works as a musical supervisor in the Los Angeles area. Rhoads and Roman, the couple’s two boys, were born to them. The guitarist has admitted that he named his sons after late guitarist Randy Rhoads and Los Angeles Rams quarterback Roman Gabriel.

Morello instills morals in his son

In a November 2019 interview with Elaine Sir, the singer discussed his parenting practices and his sons.

When asked what three virtues he wanted to instill in his children, the Audioslave member stated that they should be gentle, fierce in protecting the underdogs, and self-reliant. He also hoped that his sons would be both kind and strong in their defense of the underdogs.

Children teaching their parents’ principles, he remarked, is the greatest surprise of parenting. He reminded parents that their children were their own persons, and that rather than telling them what to do, they should try to model it for them.

“They’re not pets or projects. They’re individuals who are going to shape their own destiny. So you do your best to try and model… rather than telling them they must be Presbyterian or must fight for human rights — you MODEL that.”

A successful child, according to Morello, is one who is confident and emotionally secure in the knowledge that they are loved and cared for. This is just what the singer desires. There had never been a father in his life because he was reared by his mother. He stated that he would ensure that his son’s experience would not repeat itself.

Morello’s approach to raising successful children, as he defines them, is to be there and prioritize them, even if it means foregoing work and relaxation. He claims that he never refuses his children’s requests to do things with him. His main motivation is to instill in his children the belief that they are the most important persons in his life.

Morello admitted that juggling children and his profession is difficult for him. He’d cut back on his trips so he wouldn’t be separated from his children. Referring to his own youth, the artist stated that he was fortunate to be able to make decisions that allowed him to spend more time with his children.

The singer stated that he tries to have as many unstructured playtimes as possible. Going around the yard looking for five different sorts of leaves, hiking, and looking for coyote trails are some of the activities he does with his sons. He also participates in baseball with them, as well as other children and their parents.

Morello said he began teaching his sons about civil rights at an early age, even though he didn’t know what age was appropriate. The actor stated that it was crucial for the children to comprehend the people who came before them because the children are Kenyan, Italian, and speak a little French. He doesn’t simply highlight large achievements, but also modest ones, using the example of his cousin Jomo Kenyatta, Kenya’s president who is also a pianist.

“I think it’s important that they know all the stories. From the successes and the failures and the richness of their history. Not just the glossier highlights.”