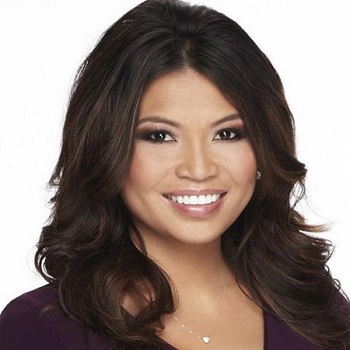 Elita A. Loresca, a Filipino-American newscaster, is presently employed at Houston’s KTRK-TV. She is also regarded as one of the hottest newscasters, having been named one of FHM magazine’s sexiest newscasters in America.

Elita graduated from Chino High School in 1995. She was an avid basketball player during her high school years. She then attended at Cal State Fullerton, where she received her bachelor’s degree in Broadcast Journalism.

Mississippi State University also awarded Elita a certificate in Broadcast Meteorology. She is of the Asain ethnicity.

In the year 2000, Elita Loresca began her journalism career as a news associate at KCBS-TV in Los Angeles. As a news associate, her main responsibilities included assembling scripts and operating Teleprompters during newscasts.

During the three terrible hurricanes of 2005, Hurricane Katrina, Hurricane Rita, and Hurricane Wilma, she reported for her station from the National Hurricane Center. She relocated to Los Angeles in 2007 and worked for seven years at KNBC before coming to Houston to work at KTRK-TV.

How much money does Elita Loresca have?

Loresca has a net worth of $5 million dollars. Elita Loresca became a well-paid journalist as a result of her professional achievement. She earns a decent wage. The media personality has amassed a sizable net worth as a result of her work on a number of well-known networks.

The journalist also owns a home in Houston, Texas, according to some accounts.

Loresca is a mother of three children. Elita has been married to Ryan Nuveman after a beautiful wedding ceremony on September 4, 2010. Ryan Nuveman, her boyfriend-turned-husband, is the brother of USA Softball Olympic gold champion Stacey Nuveman. When they originally met and started dating has yet to be revealed. According to insiders, the couple dated for a few years before exchanging vows.

They have two children together.

They have two children: Ryan Nuveman Jr., a son, and Emery Rylee Nuveman, a girl. Her spouse and children currently reside in Houston, Texas.

Elita Loresca has volunteered for Habitat for Humanity, an international, non-governmental, and non-profit organization, as well as The National Alliance, to Nurture the Aged and the Youth (NANAY), a non-profit Filipino organization, in addition to her media job.

Pistachio ice cream is a favorite of Elita Loresca’s. She is conversant in Tagalog in addition to English. Her sisters have given her the moniker ‘Lee Lee Poo.’ She also enjoys eating at the Pappas establishments.

She’s also known for being a beautiful woman among her male fans. She enjoys being trendy and was chosen the sexiest newscaster by the American magazine FHM, and was even featured in the magazine’s October 2006 issue.