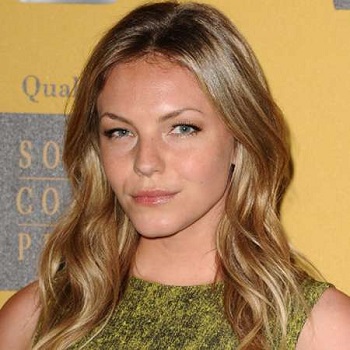 Eloise Mumford, who was born and raised in Olympia, is an American actress best known for her roles in the television series Lone Star and The River. Her outstanding performance in the critically acclaimed films Fifty Shades of Grey, Fifty Shades of Darker, and Fifty Shades Freed earned her even more praise. Crash, Mercy, Christmas with Holly, and Chicago Fire are some of her other television credits.

Tom and Nancy Mumford gave birth to Eloise Mumford on September 24, 1986, in Olympia, Washington. She is of White ethnicity and belongs to the United States of America. Eloise grew up with two siblings: Anna Mumford, her older sister, and Kai Mumford, her younger brother. At the tender age of seven, Mumford was moved by the production of South Pacific and decided to pursue acting. As a result, she went on to act in high school plays.

She attended Annie Wright School in Tacoma, Washington, and Capital High School in Olympia after being homeschooled until fifth grade. She then went on to the Tisch School of the Arts at New York University, where she graduated in 2009. In addition, she enrolled in the Atlantic Acting School.

Mumford co-starred in the short film Some Boys Don’t Leave with Jesse Eisenberg while in college. Crash gave her her first television role. Megan Emory was her character on the show for four episodes. She went on to play minor roles in television shows such as Law & Order: Special Victims Unit, Mercy, Christmas with Holly, and Just in Time for Christmas.

Eloise became well-known for her portrayal of Lindsay Holloway in five episodes of Lone Star. She shared the stage with James Wolk, Adrianne Palicki, David Keith, and Bryce Johnson on the show.

She played Lena Landry in eight episodes of The River in 2012. In the same year, she starred in So Undercover as Sash Stolezinsky. She starred alongside Matt O’Leary, Whip Hubley, and William Russ in the 2013 film Drones as Sue Lawson. She appeared in two films in 2014: Not Safe for Work and In the Blood.

Is Mumford in a Relationship?

Although the 34-year-old actress has yet to marry, scrolling through her Instagram account reveals that she is in a relationship with a man whose identity has yet to be revealed to the public. The couple was frequently seen vacationing in different locations. The couple, however, has shown no signs of getting married anytime soon. Eloise was also rumored to be dating Luke Grimes, her co-star in the Fifty Shades Darker film. Eloise herself debunked the rumor in a series of interviews. Mumford is active on social media, with over 190,000 Instagram followers as of 2020.