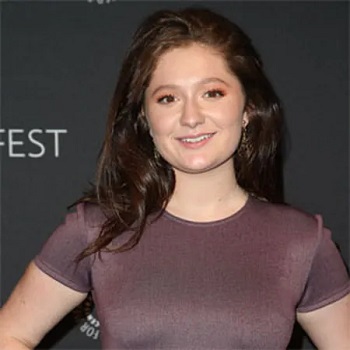 Emma Kenney is an American actress best known for her role as Debbie Gallagher in the American comedy-drama television series Shameless. She will soon be seen in the upcoming television series Roseanne as Harris Healy. Emma Kenney also contributed her voice to the films Epic and My Love Affair with Marriage.
She began acting at the age of five and has since starred in a number of voiceover parts and commercials. Kenney debuted in Hollywood with the short film Lyre Liar in 2008. She has since acted in a number of films and television programs, garnering praise from both fans and reviewers for her acting abilities.

Emma Kenney was born Emma Rose Kenney in Manhattan, New York, on September 14, 1999. Her zodiac sign is Virgo. Her nationality is American, and she is White in terms of ethnicity. Kenney is the daughter of attorneys Gillian Kenney and Kevin Kenney (a sports writer). Kenney and her friend Ciera Gill began acting when they were just five years old. She later appeared in a Scholastic Books advertisement. She also appeared in a number of additional ads and voiceovers.

Emma Kenney first appeared on the big screen in 2008 with the short film Lyre Liar. Bittersweet, a film she worked in the same year, was her second film. She appeared in two films the next year: A (Not So) Civil Union and Three Little Puppets. Kenney’s voice was first heard in Epic, a 3D computer-animated action-adventure film, and then in My Love Affair with Marriage.

Kenney is now starring alongside Roseanne Barr, John Goodman, Sara Gilbert, and Laurie Metcalf in the TV sitcom Roseanne.
Kenney featured in an ad for Scholastic and later directed the short film The New Girl In Town, in addition to movies and series.

Emma Kennedy is said to have a net worth of $1 million, according to certain reports, but this figure is still being verified.

According to TMZ, Kenney made $12k per episode in the first season of Shameless. Because the first season contained 12 episodes, we can assume she earned $144,000. Her income grew by 4% between Seasons 2 and 3; she now makes $12.5k and $13k each episode, respectively.
Similarly, her film Epic, which had a budget of $93 million, grossed $268.4 million at the box office. The film has a 6.7 out of 10 rating on IMDB.com.

Kenney announced on Twitter that she had purchased a new home.

She makes a sizable sum at a young age, which enables her to live a luxury lifestyle.

Kenney is also active in the community. She aided in the fundraising efforts for Brain Tumour UK. She also gave her hair to the Little Princess Trust, a charity that makes wigs for cancer patients who have lost their hair.

Emma Kenney is a reserved individual. She prefers to keep her dating and love life out of the spotlight. She is currently more focused with advancing her profession than with getting involved in relationships. Kenney confirmed her single status via Twitter.