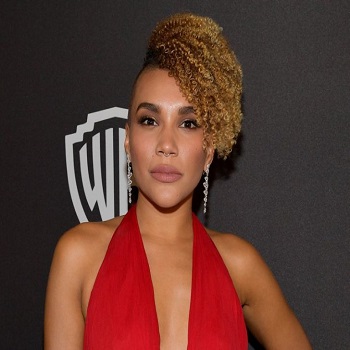 Emmy Raver-Lampman, an actress and singer from the United States, began her acting career in theaters and received her big break from The Umbrella Academy (2019- Present). Allison Hargreeves is one of the main characters in the Netflix series. Hair, Wicked, and Hamilton were among the theater works and Broadway appearances that catapulted the Virginia-born actress to stardom.

Raver-Lampman was born on September 5, 1988, in Norfolk, Virginia, and was adopted as a baby. Greg, her adoptive father, is a teacher, and Sharon, her adoptive mother, is an Old Dominion University professor. Emmy is an American national with mixed heritage, including African-American ancestry.

Emmy reportedly traveled to more than 50 countries as a child as a result of her mother’s employment. In her hometown of Norfolk, she attended Governor’s School for the Arts and Maury High School. Raver-Lampman went on to Marymount Manhattan College in New York City, where she earned a Bachelor of Arts in Theater in 2012.

Breakthrough With the release of ‘The Umbrella Academy,’

Emmy has been a professional since 2010, and she made her on-screen debut six years later, in an episode of Odd Mom Out, in 2016. Following that, she made cameos in the TV shows A Million Little Things (2018) and American Dad! (2019).

The Netflix superhero series The Umbrella Academy, which premiered on February 15, 2019, was the catalyst for her acting career. Emmy Raver-Lampman co-stars with Ellen Page, Tom Hopper, David Castaeda, and Aidan Gallagher in the film Allison Hargreeves / Number Three as one of the main characters.

Another season (Season 2) of The Umbrella Academy was released on July 31, 2020, and received excellent reviews from critics.

She appeared in the film aTypical Wednesday in 2020 and is expected to participate in the next film Untitled Horror Movie (UHM) (under post-production).

Before her appearance on television, Emmy Raver-Lampman had a successful career.

Emmy devoted herself to theaters and Broadway productions before settling in the on-screen project. She landed a role in the Off-Off-Broadway production Children of Eden while attending Marymount Manhattan College. She made her Broadway debut with Hair later that summer (2010- 2011).

Emmy was a part of the original Broadway production Hamilton from 2015 to 2016, as well as the Chicago production and national tour from 2016 to 2017. She most recently played Martha in Gun & Powder, which ran from January to February 2020 at Signature Theatre.

In 2020, how much money will Emmy Raver-Lampman be worth?

Emmy Raver-Lampman, an American actress, has a net worth of $300,000 as of August 2020, according to online sources. She made the most of her money through working in theatre. Emmy’s fortune changed dramatically after she joined The Umbrella Academy.

Emmy makes tens of thousands of dollars per episode as one of the major cast members of the web TV series, amounting to a six-figure sum for each season.

Despite the fact that the actress has yet to sign an official sponsorship arrangement, she frequently promotes Crosstown doughnuts and Goorin Bros. (hat makers) on her 1.1 million-follower Instagram account (@emmyraver). Each sponsored article has the potential to pay her between $2,223 and $3,705 dollars.

Although the star of the Umbrella Academy has yet to marry, she is in a loving relationship with her boyfriend Daveed Diggs. The duo is alums of the stage play Hamilton, and they collaborated when the musical premiered in 2015. According to Yahoo!, Emmy routinely exchanged Instagram images with Diggs and her other pals over the years, but it wasn’t until 2019 that they began dating.

They are, however, not overly open about their relationship in public. The duo shared a red carpet moment with Diggs’ co-star Janina Gavankar at the 2019 Film Independent Spirit Awards.

Emmy affirmed their romance is still going strong in a 2020 interview with Refinery29 after she mentioned quarantining with Diggs in their Los Angels home.