Luenell Campbell, an American comedian, recently spoke up about her husband’s health problems. Despite his condition, she maintained that her husband was the best man on the planet. 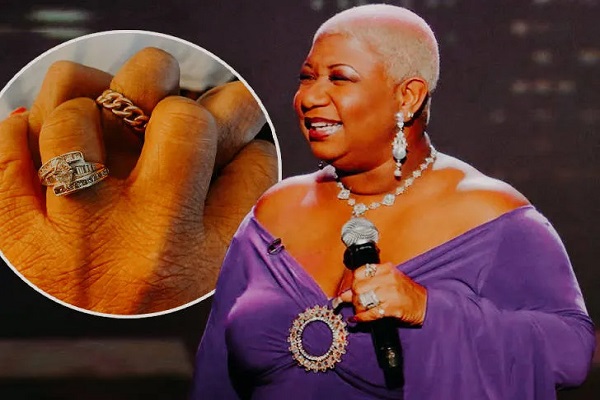 Luenell, a comedian and actress, recently confessed in a Youtube video posted on August 10, 2020 that her spouse was a better man than any other so-called competent man right now.

She Discusses Her Marriage and Her Husband

Luenell, a comedian, is still smitten with the man she married years later. The comedian talked up on marriage in a lengthy interview with expediTIously- WITH TIP “T.I.” HARRIS.

The comedian talked about how marriage was about loving and supporting someone when they were at their lowest point in the video.

She went on to say that taking marital vows meant always being there for one another, regardless of income or health.

Luenell went on to say that she and her spouse were currently at the “illness section” of their vows. That doesn’t change the fact that she adores him.

Campbell’s husband had recently been diagnosed with prostate cancer and was suffering from COPD. Luenell, on the other hand, was by her husband’s side like a rock.

Regardless of their sexual relationship, the American comedian turned actress claimed that she loved and appreciated her spouse with all her heart. And she said that this is how marriages should be. She feels that young couples should strive to get there in their entirety.

That’s not all; the 61-year-old comedian also praises and loves her hubby on her other social media accounts.

The loyal wife shared a photo of her hands linked with her husband’s on November 4, 2020. The evergreen couple was proudly displaying their wedding band. Luenell came up with the ideal word combination to complement the image.

“In this Hate filled world, I’m glad I have a man who loves my moody, chubby, crazy, loud, restless, wild Black [explitive]. Evil prevails, Love has lost. If you have someone like that in your life let’s talk about it because we’re going to all need some love right now. Disappointment runs rampant but UNITY is survival. Grab someone you love (and more importantly, someone who loves You), and hold them Tight! We are in for the fight of our lives.”

For the sake of her and her husband’s safety, she has banned her daughter

During the COVID-19 epidemic, the devoted wife went to great lengths to protect herself and her ill husband from the virus.

On Instagram, the comedian revealed that she had barred her daughter Da’Nelle from her home. The actress explained the situation to her admirers.

Her daughter and boyfriend, it turns out, have been spending time with her friends rather than being isolated. Luenell texted her daughter to remain a safe distance because of the severity of COVID-19 among the elderly and sick.

“I have to make the best decision for me and my husband who is already suffering from COPD. This is our LIVES we are talking about people especially if you are in a certain age category. I’m bummed but it is what it is.”

Someone He Was With Outed Terrel Carter As Gay!

Terrell Carter is an American actor, singer, and songwriter who debuted in the fourth season of Empire as a regular. In the film, he plays a gay character, just as he is in real life.Terrell C
Read More
March 31, 20220

Mr. Fruit, a YouTuber, has a flair for entrepreneurship.

Mr. Fruit is a gaming YouTuber who plays a range of games including Apex Legends, Destiny, Overwatch, Super Smash Bros, and more. But, that’s not all. Mr. Fruit has taken the entrepreneurial route aft
Read More
December 7, 20210

Nick Stellino and his wife realized their dream of hosting a food show together.

Nick Stellino is currently a well-known figure in the culinary world. Despite the fact that most people would have given up, the chef persisted and realized his dream. He was not alone, though; he was
Read More