Sommer Ray, the ex-girlfriend of British YouTuber FaZe Jarvis, proves in a game that she knows him better than his current girlfriend, Hannah Ridgeway. 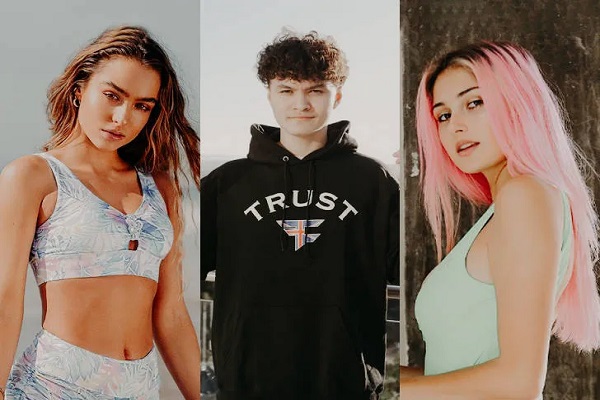 Jarvis Kaye, better known as FaZe Jarvis, is a Twitch Streamer, YouTuber, and gamer from the United Kingdom. Jarvis recorded a video with his previous and current girlfriend playing the game ‘Who Knows Me Better Challenge’ on February 13, 2021.

Jarvis’ Ex-Girlfriend and Current Girlfriend in a YouTube Video

Jarvis’ ex-girlfriend Sommer Ray and current girlfriend Hannah Ridgeway competed in the “Who Knows Me Better Challenge.” He shared the footage with his 4.41 million YouTube subscribers on his channel.
The games had simple rules: Jarvis would ask the girls a series of questions about him, and they would write down their responses and show them to the camera. A point would be awarded to the person who correctly answered the questions.
His favorite restaurant, clothing brand, animal, car, artist, color, worst fear, least favorite color, celebrity crush, and many more questions were asked.

Except for a couple, Ray had gotten most of the answers right from the start of the game. By the second question, Jarvis had already commented on how his ex knew him better than his current girlfriend, pointing out how Ridgeway didn’t know the answers to simple questions about him.

Ray received 10 points out of 17 questions, while Ridgeway received 4.5 points.
The video has received over 3.58 million views and 123 thousand likes.

The actual number of Gamer’s girlfriends and ex-girlfriends is unknown; however, a few have been confirmed.

In 2018, Jarvis was said to be dating Instagram star Harriet Parkes. FaZe Kay, his brother, and Charlotte, Harriet’s sister, both posted films on the couple’s relationship. According to Charlotte’s video from December 2018, the couple broke up over Fortnite.
In 2019, Jarvis was dating Carrington Durham, an Instagram model. Jarvis’ brother, FaZe Kay, shared a YouTube video of the couple breaking up in May 2019.

Jarvis was playing Fortnite in the video, while his Instagram model girlfriend sat next to him, hoping to spend more time with him. The pair chose to separate due to their occupations and a lack of time to spend with each other.

Jarvis was also rumored to be dating Sommer Ray, an Instagram model. His brother Kay set a date for him in September 2019 since he had a crush on Ray. Since then, Ray has appeared in a number of videos with Jarvis, both on his own channel and on the channels of others. If the two were dating, and if they were, when did they end their relationship?
Jarvis is presently dating Hannah Ridgeway, an Instagram model and Youtuber. Jarvis shared a video in January called ‘Spending 24 hours with my Crush,’ in which he and Ridgeway spent time together going for coffee, applying makeup, yoga, and eating supper. They’ve been together since then, and they’ve been making YouTube videos on a regular basis.

Despite the fact that they dated/are dating Jarvis, Ray and Ridgeway are great friends. They also collaborate on videos with each other and Jarvis. They also use Instagram to share images of themselves with one another, complimenting and admiring one another.