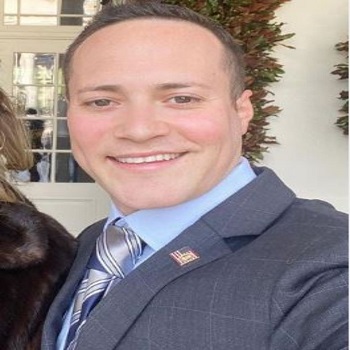 Gavy Friedson has served as a firefighter, volunteer police officer, EMT, first responder, and spokesperson, among other things. Friedson was also well-known in the media as the adoring spouse of Katie Pavlich, a conservative commentator, writer, and podcaster from the United States.

Since their 2017 wedding, the couple has been together. Gavy is the Director of International Emergency and Brand Ambassador at the United Hatzalah of Israel, while his wife Katie works for Fox News Primetime and The Five.

Do Katie Pavlich and her husband have children?

Katie Pavlich, an American conservative commentator, is married to Gavy Friedson. They married on July 5, 2017, as previously reported, but kept the specifics of their ceremony under wraps. Furthermore, the couple has yet to reveal how and when they started dating.

Despite the fact that their excellent compatibility in the relationship suggests that they have been together for a long time. They have yet to have children together. Rather, the couple is currently caring for a labrador named Gadsden, whom they consider to be their child.

Katie Pavlich, his wife, is an active Instagram user (@katiepavlich), having over 273K followers as of 2021.

Fast and Furious: Barack Obama’s Bloodiest Scandal and Its Shameless Cover-Up were published in 2012, and Assault & Flattery: The Truth About the Left and Their War on Women was published in 2014. She has made appearances on Fox News, CNN, CNBC, MSNBC, and Fox Business, among others.

Gavy Friedson received his Bachelor’s degree in Communication and Media Studies from the Interdisciplinary Center Herzliya in Herzliya, Israel, in 2014. In 2015, he graduated from Tel Aviv University with a Master of Public Health in Crisis/Emergency/Disaster Management.

Friedson was born on December 30, 1988, in Boca Raton, Florida, and relocated to Israel with his family when he was eleven years old. Friedson volunteered to work as an EMT on the ambulance’s back when he was 15 years old. He joined the fire department at the age of 16 and enlisted in the Israel Defense Forces at the age of 18, first as an infantry soldier and subsequently as a spokesperson.

Gavy Friedson is 32 years old as of mid-2021 and is slightly taller than his wife Katie, who measures 5 feet 4 inches.

Friedson has been volunteering with the United Hatzalah of Israel, a non-profit volunteer emergency medical service in Jerusalem, since early 2008. Before being appointed to the role of Deputy Director of International Operations in January 2016, he served as an EMT, first responder, and international spokeswoman.

Friedson has served as the Director of International Emergency Management and Global Ambassador for the United Hatzalah of Israel since February 2020.

According to certain web estimates, Gave Friedson has a net worth of around $800,000. He presently works as the Director of International Emergency Management at the United Hatzalah of Israel and has previously worked as a firefighter, volunteer police officer, EMT, first responder, and spokesperson for several non-profit organizations.

Katie, his wife, is said to be worth $2 million. She made the majority of her money working for Fox News, where she was a co-host of Fox and Friends (2012-20), Outnumbered, The Five, and Fox News Primetime. Her yearly income from the channel is rumored to be $200,000.