Gay rumors have been sparked by Froy Gutierrez’s photos with Richard Madden.

“Are you dating [Richard Madden]…#LoveWins,” one admirer asked. 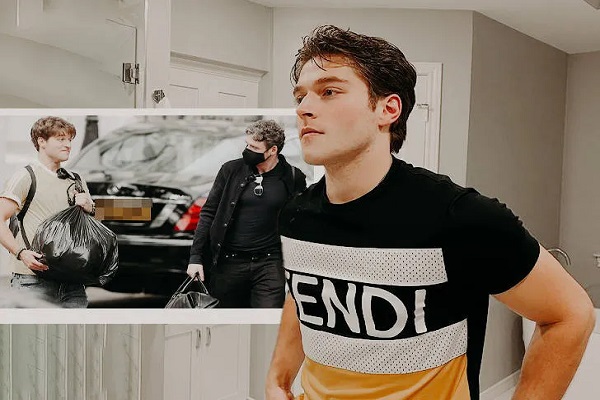 Some of Froy Gutierrez’s Snapchat and Twitter followers had long hypothesized that he was gay, but there weren’t enough serious shreds of proof to make anything stick.

However, in September 2020, Dailymail revealed that the Teen Wolf star was in London with Scottish actor Richard Madden in a report. Madden is known to have previously shared a residence with Brandon Flynn, the star of 13 Reasons Why, who has been outspoken about his sexuality.

In London, Gutierrez and Madden were seen together

In September, the Dailymail released an article revealing Guitierrez was in London with his actor pal and Game Of Thrones star Madden. The report included photos of the couple walking down the sidewalk with a big black garbage bag, taking out the trash.

With a full black suit, the erstwhile King Of The North from the fantasy program Game Of Thrones looked as gorgeous as ever. He was dressed in a dark denim jacket with black trousers and a matching top.

The black mask he wore on his face not only kept him safe during the coronavirus pandemic, but it also helped him keep a low profile.

Gutierrez, 23, was just as attractive. He was dressed more casually than his elegant companion, with what appeared to be a yellow jersey top teamed with faded pants.

Later, the two were seen driving away in a car, with Madden behind the wheel.

Gutierrez and Madden Spent Time in Isolation in Los Angeles Together

These photos were released mere months after word broke in May that Gutierrez and Madden had spent the lockdown together in Los Angeles.

The Bodyguard star spent the lockdown in Emilia Clarke’s opulent two-bed home in Los Angeles, according to Simon Boyle of The Sun.

After filming the upcoming Marvel picture Eternals in London, Madden flew back to LA a few weeks before the lockdown began, according to the insider. The 33-year-old icon is said to have moved his pal Gutierrez into the magnificent mansion to keep him company during his seclusion.

They went on a picnic as a group

Gutierrez and Madden were sighted together again on April 11, 2021, heading for a picnic at Hampstead Heath in London, after being seen together previously.

The two were photographed wandering around the charming village while holding Marks and Spencer bags.

All of these factors point to the fact that the two actors have been dating for quite some time. Nothing is guaranteed, though, unless they choose to reveal the truth.

Is Froy Gutierrez, on the other hand, gay?

While the fact that they spent the lockdown together isn’t enough to draw any conclusions about their sexual orientation, the possibility that Madden and Gutierrez are having a hidden love affair appears to be causing quite a stir.

Even Gutierrez’s admirers are curious about his relationship with Madden.

“Are you dating [Richard Madden]…#LoveWins,” one admirer commented on one of his images from the BLM rally in Santa Monica.

Brandon Flynn and Madden once shared a residence

Madden lived with Flynn in their Los Angeles home before isolating with Gutierrez in the super-expensive luxury mansion. After Madden’s breakup with actress girlfriend Ellie Bamber in early 2019, they moved in together.

Rumors of Madden’s homosexuality spread like wildfire, prompting media outlets to interview him directly. When approached to clear the air, the Eternals star preferred to keep his personal life private.

“I just keep my personal life personal. I’ve never talked about my relationships.”

Richard’s response did nothing to quell the rumors, even if it didn’t confirm them.

Related Posts of Gay rumors have been sparked by Froy Gutierrez’s photos with Richard Madden.