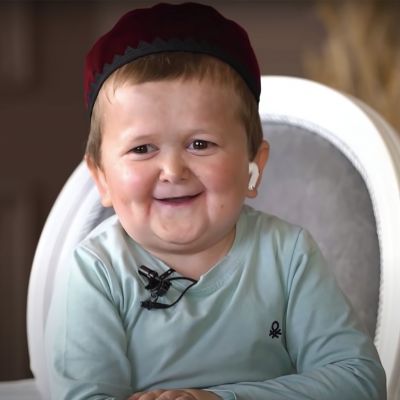 Hasbulla Magomedov was born on 7 July 2002 and he is currently 20 years old. He was born in Makhachkala, Dagestan, Russia, and is a Cancer. Hasbulla has yet to reveal anything about his parents or siblings.

There is, however, information that Hasbulla has a sibling. Furthermore, this personality is thought to be born with Growth Hormone Deficiency (GHD).

Professionally, Hasbulla Magomedov is a popular social media celebrity. He is recognized on Instagram for his small size and accomplishments in the MMA scene. On Instagram, Hasbulla is available under the account @hasbulla.hushetskiy. On this account, this youthful celebrity has acquired more than 5.6 million views.

Likewise, he is famous online as “Mini Khabib” after he went viral sharing videos of himself on TikTok. Also, this personality has been publishing content on his Instagram since November 2020 but only went big on TikTok in 2021. As of October 2022, Hasbulla has inked a five-year contract with UFC.

Further, in May 2021, Hasbulla’s popularity surged after his pre-fight press conference with Tajikistan singer Abdu Rozik. Additionally, this personality had a notable rivalry with the aforementioned artist – Abdu Rozik.

Similarly, his username on Tiktok is @hasbula.hushetskiy. While creating this biography, this profile has received more than 11.8K followers and 81.8K likes. This is his new account and the earliest video dates back to October 2022 and has only roughly 30 videos so far.

Hasbulla was banned from Instagram in 2021. This happened when this personality threatened a woman in a video who shared a video of his sister without permission from him or his family members.

In the said video, Hasbulla reportedly threatened that he would not leave the said girl alive unless she apologizes to the whole Instagram for capturing a video of his sister and placed on Instagram.

Moreover, this personality also has been involved in a social media spat with Conor McGregor. This happened after Hasbulla gave his chicken the same name as the Irishman. Conor responded with a caustic comment and labeled this personality a “smelly little inbred.”

Hasbulla Magomedov has credited a few brands and personalities on his Instagram posts for their product and service consumption, promotion, and advertisement. Some of them include Murat Kafkas (@karachayhorse akademi), @hasbullaofficial, and Burak Özdemir (@cznburak) among others.

Hasbulla Magomedov is single and not involved in any romantic relationships while writing this biography. Hasbulla has not revealed any information or social media posts pertaining to his love life, affairs, possible partners, previous and present lovers, or anything linked to his private life.

Hasbulla Magomedov stands tall at the height of 3 feet 4 inches as per his interview with SportsKeeda. Likewise, Hasbulla’s weight is around 20 kg. Further, this Russian star has brown eyes and blonde hair hue.

Talking about his social media presence, Hasbulla Magomedov joined Twitter in November 2021. So far, his @hasbulla NFT Twitter profile has acquired more than 251.9K followers. Similarly, his username on Tiktok is @hasbula.hushetskiy. So far, this profile has around 11.8K followers and 81.8K likes.

Likewise, he is available on Instagram under the pseudonym @hasbulla.hushetskiy. As of December 2022, this profile has attracted more than 5.6 million followers. There is also another Instagram profile with the username @hasbullaofficial dedicated to his website and shopping.

Hasbulla Magomedov has a net worth of roughly $200,000 US dollars as of 2022. Hasbulla makes his profits through his successful job as a social media star and content developer. This Russian celebrity is also paid by UFC after their 5-year deal.