In his professional endeavors, Jim Jefferies has the support of both his wife and his ex-girlfriend

Jim Jefferies has gone a long way in his career, and he considers himself fortunate to have the support of his wife and ex-girlfriend. 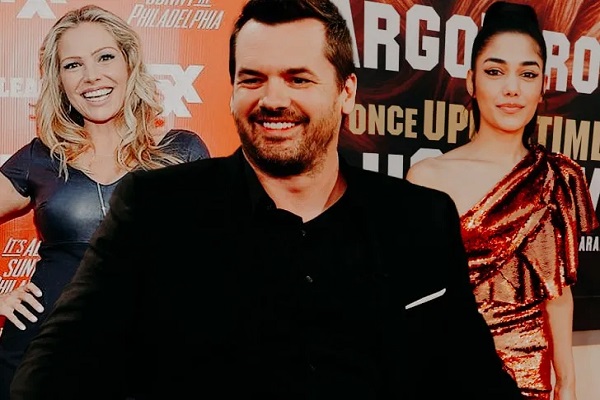 Jim Jefferies, an Australian-American comedian, has come a long way since his days on the American comedy Legit and the late-night show The Jim Jefferies Show. Jefferies has the full support of his wife and ex-girlfriend in his professional endeavors, as evidenced by his new Netflix special Intolerant, which was released in July 2020.

The Support Pillars of Jefferies

In keeping with the classic phrase, “Behind every successful man, there is a woman,” Jefferies has two women to support him wholeheartedly as he climbs the corporate ladder: his wife, Tasie Lawrence, and his ex-girlfriend Kate Luyben.

Lawrence posted an Instagram message on July 27, 2020, expressing her love for her partner. As she tagged a proud caption, the actress appeared to be blown away by her husband’s performance.

“If you haven’t seen @jimjefferies’s “Intolerant” on #netflix yet then you are missing out!”

Aside from his wife, the comedian has a good relationship with his ex-girlfriend, who is also a big fan of his show. Luyben posted on Instagram on July 9, 2020, about the comedian’s Netflix special. Jefferies is great, she captioned, and the show made her giggle nonstop.

“I watched this (Jim Jefferies: Intoletant) today, mostly while giggling by myself in the Trader Joe’s line up. ðŸ˜‚Thanks @jimjefferies ðŸ¤—ðŸ˜‚ðŸ˜Â You are so hilarious and I’m so proud of you! Laughter really is the best medicine, you are awesome!! @netflix.”

His Ex-Girlfriend Is Still Friends With Him

Jefferies had a connection with actress Luyben before marrying his wife. In 2011, the ex-couple met and began dating. On November 7, 2012, they welcomed their first child, Hank Jefferies. The pair, however, grew apart and eventually divorced.

This does not, however, suggest that the comedian and his ex-girlfriend are no longer together. They maintain a friendly relationship and are supportive of one another.

In September 2020, Jefferies married Lawrence. On Instagram, the bride shared a lovely wedding shot. In the photograph, Jefferies grabs her waist and kisses her. One of the bride’s hands is placed over her husband’s chest. She clutches her wedding bouquet in the other hand.

Lawrence and Jefferies are best friends turned lovers turned husband and wife, according to this post.

Related Posts of In his professional endeavors, Jim Jefferies has the support of both his wife and his ex-girlfriend