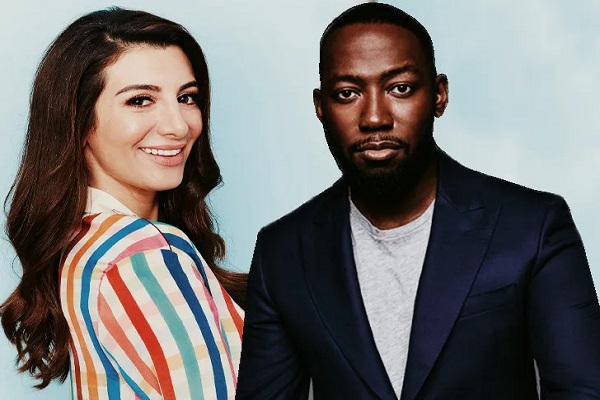 Rumors circulated that Lamorne Morris, an American actor, was dating Nasim Pedrad, a co-star from the hit Fox sitcom New Girl. Their appearances as a couple in their endeavors, such as the film Desperados, fueled relationship rumors.

Morris and Pedrad played Winston and Aly, respectively, in New Girl. When their characters initially met, Aly pretended she didn’t know anything about Winston other than their profession. They became romantic as the series continued.

They were coworkers at LAPD for a while before becoming buddies. Following that, they fell in love with one other, eventually marrying and having a kid together in the final season of the show.

In Desperados, the performers’ character plots were different, yet they shared the same intense chemistry.

Pedrad played Wesley, one of the main characters in the Netflix film. The plot of the film begins when Pedrad’s character believes her lover has ghosted her and sends an angry email to him. However, he was recently involved in an accident in Mexico.
She travels to Mexico with her two best friends, fearful that the email would terminate her relationship. On the way there, she runs with Morris’ character Sean, whom she had previously dated. Pedrad and Morris become entangled in their own personal issues while attempting to correct her error.

In Real Life, They Aren’t Dating

Morris’ chemistry with Pedrad was so noticeable that it sparked a flurry of speculations and even requests for him to date her in person.

“Can y’all date in real life?!,” a follower called @amandapascual_ asked on one of his Instagram images dated July 2, 2020. “YOU GUYS WOULD BE ADORABLE.” “All need to date irl already…” wrote another user, @cosmicalbabe, in a similar vein.
However, despite their on-screen connection, the two are not dating in real life.

According to Cinemaholic, Morris answered the fans’ questions by emphatically declaring that he and Pedrad were only friends.

Cinemaholic, on the other hand, has no source or genuine quotes from Morris to back up their claims. Morris had doubts about partnerships, according to the report, because of a grief induced by an ex-girlfriend who cheated on him. However, there is insufficient evidence to support the claim.

Morris has only been seen with one woman in public, and that is E! anchor Erin Lim.
Morris never publicly acknowledged his relationship with Lim at first, but they were seen together a few times in public. When Lim shared a photo of herself with Morris on her Twitter account in 2016, it drew popular curiosity. In addition, they made their first red carpet appearance together at the 2017 Emmy Awards.

Morris and Lim dated for a little over two years before breaking up. Lim is now married to Joshua Rhodes, the creative director of The Last Adam, a clothing line. Morris, on the other hand, appears to be relishing his single status.