Is Porsha Williams expecting Simon Guobadia’s child? — The Truth About Her Pregnancy Rumors

Following a few suspicious Instagram posts, fans speculated that Williams was pregnant with her fiance Simon Guobadia’s child. Is she, however? 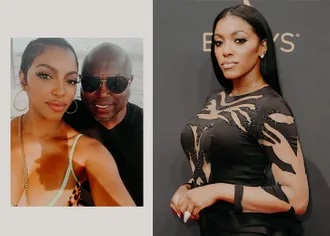 Porsha Williams has kept her fans up to date on her relationship with Simon Guobadia.

With the recent news of the surprise engagement and a few potentially misleading photos, fans are wondering if Williams is pregnant with her fiancé’s child.

Guobadia has officially confirmed their engagement.

On May 10, 2021, the groom-to-be confirmed the engagement rumors with an Instagram post featuring the massive emerald-cut ring he proposed to her with. The post was accompanied by a heartfelt caption in which he declared his love for her.

Previously, the Real Housewives of Atlanta star teased fans on Instagram with hints of her engagement on May 9, 2021.

In the post, the engagement ring on her finger was clearly visible, but she decided not to reveal everything just yet. However, there was something else in those images that drew the attention of the fans.

Fans speculated further that the reality star was hiding a baby bump because she was wearing a loose-fitting colorful dress that completely obscured her figure in the post.

Porsha Williams Is Not Pregnant, According to a Source

A source close to the reality star confirmed to HollywoodLife that she is aware of the rumors, but she is not pregnant. Williams has been downing cocktails and shots on Instagram to make her point.
She took to Instagram on Thursday, May 13, 2021, to share a video of herself making a cocktail toast at a brunch hosted to celebrate her BFF Shamea Morton’s birthday.

Soon after, she posted a series of photos of herself in a skintight, bright red bodysuit, flaunting her physique and, more importantly, the lack of a baby bump.
The photo also appears to be recent, as she was wearing the beautiful engagement ring that Guobadia had given her just a few days before.

The post also included a quote from Tony A. Gaskins Jr., who implied that the fans were jumping to conclusions without fully comprehending the facts.

These posts were sufficient to persuade some fans that the pregnancy rumor was a hoax. “Welp. “This puts an end to the pregnancy rumors,” one fan said.
However, some people found it difficult to believe. For instance, there was one fan who wrote, “I love you Porsha but you ain’t fooling us. I know this is an old photo, but show off that baby bump.”

Porsha Williams is not currently planning a wedding.

The same source also shared insights regarding Williams’ wedding plans, or rather lack thereof, with the outlet. According to the source, she has not begun wedding preparations.

Instead, she is cherishing things as they are now and is on cloud nine. She is overjoyed to start a new chapter in her life.

To say the least, things are moving quickly for the reality star. Believe it or not, it was only three days ago, on May 10, 2021, that she came clean about the relationship with her fans.

Related Posts of Is Porsha Williams expecting Simon Guobadia’s child? — The Truth About Her Pregnancy Rumors