Jailyne Ojeda Has Had To Deal With A Lot Of Criticism. Especially when it comes to her physical appearance. The model has been chastised for getting butt implants and lying about it. However, Ojeda refutes the claim while telling a shocking story about a botched nose job. 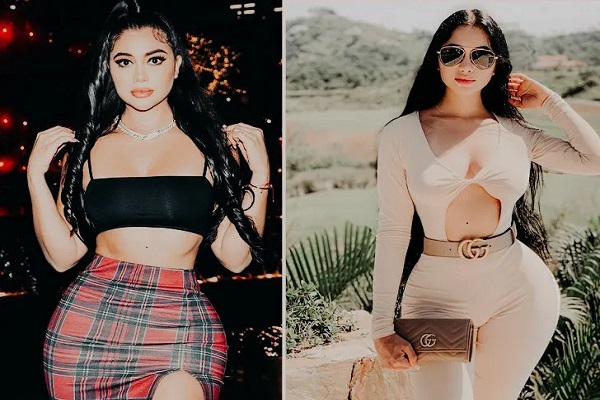 Jailyne Ojeda’s well-toned, sensual form has elicited both compliments and scathing and nasty comments. While the majority of admirers are enamored with the social media sensation’s fitness videos and steamy modeling photos, some make derogatory remarks about the young model’s alleged butt implants.

Although the celebrity TikToker has been outspoken about her botched nose job, she has categorically denied any body plastic surgery.

Ojeda has endured the wrath of naysayers as well as the painful consequences of a face surgery throughout the years, all of which we shall examine in this piece.

There’s no disputing that the Mexican beauty has one of the most desirable curvaceous bodies on the planet. For her beautifully toned body, the model attributes her Latino genes, an aggressive gym program, a controlled diet, and a waist trainer belt.

She often posts various fitness and diet videos on her Instagram account, which has millions of followers. Her TikTok bio stated, “I’m not made of plastic; I simply have wonderful genes. There will be no bullying.” The crowd, on the other hand, refuses to believe the young model.
Several Reddit posts debunk the social media star’s claims of working out and eating a healthy diet. Some commenters have even referred to her as a shameless liar.
Users have slammed Ojeda’s physique even on Instagram. A before and after comparison of the Latina model was uploaded on the Instagram profile False Beauty, which claims to distill all conceptions of phony or changed bodies. It called out her training routine and dietary claims as a scam.

“She had plastic surgery at such a young age. The sad thing is that she doesn’t admit it. She keeps telling that she works out, eats clean and uses a waist trainer. Who is she trying to fool? “

In defense of herself, the self-described philanthropist and entrepreneur shared an Instagram post depicting her transformation from a teenager to an adult, emphasizing that she had always appeared mature in comparison to other girls her age, especially since she began menstruating at the age of ten.

Not only that, but she also claimed that individuals were photoshopping her photos in order to spread hatred. She confirmed that the before and after photos of plastic surgery were all phony.
While handling all of the comments was first difficult for the fashionista, she now claims to have braved it all.

Jailyne Ojeda had suicidal thoughts after a botched facial surgery

Is Jailyne Ojeda a plastic surgery patient? Yes, it happened once. However, she still regrets having had the operation done.

She claimed that 2017 was the worst year of her life in one of her YouTube videos. That’s when the Instagram model suffered the consequences of a botched nose job, which left her despondent.
In a 40-minute video, the influencer addressed the matter, describing how she frequently cried after the botched surgery. While she continued to post on her Instagram account after surgery, it was merely to put on a nice face for her legions of admirers, according to Ojeda.

Recalling her previous experience, the beauty star opted to have her nose operation done in Ukraine while being influenced by other girls. The doctor didn’t charge her any money for her procedure, which was the shady part. Instead, she requested a social media shout-out to promote the event.

The diva revealed that the surgeon and his assistant wanted to perform the procedure without necessary physical consultations as soon as she gave the shout-out. Furthermore, they continued to put her back to sleep until the surgery was completed. The first thing she noticed when she awoke after surgery was a girl on the bed beside her, covered in blood on the covers. The worst aspect was that she couldn’t tell if the girl was alive or dead.

Jailyne Ojeda suspected she had been assaulted

She felt a large swelling on her cheeks after a few moments and could scarcely talk. The doctor arrived inebriated, popped the bulge with his own hands, and sent her back to sleep. She awoke to find two holes in her leg, which would leave a permanent scar on her body. The YouTuber also said that she wasn’t sure if the doctor had assaulted her and that she had it checked as soon as she returned home. Fortunately, this was not the case.

Furthermore, the surgeon barred Ojeda and uploaded a photo of her disfigured face to the internet without her permission. Not only did the Ukrainian doctor destroy her appearance, but he also threatened to post the photos and videos recorded during the surgery on social media unless she gave him a shout-out. She was, however, brave enough to stand up for herself and not be intimidated into doing what he wanted. The doctor was even referred to be a monster by her.

The surgery was a disaster, as Ojeda was unable to breathe and the problem further worsened when she returned. Infections, hematomas, and abscesses plagued her, and the ordeal left her depressed for six months.

She conquered sadness with God’s love and the help of her family (especially her brother), but she couldn’t smile again when the doctor sliced the nerve that controlled her top lip. She also revealed that she still suffers from facial paralysis in an Instagram post.
In the same video, she discussed how people mistook her and began calling her plastic because of her surgery.

Thankfully, rhinoplasty specialist Ashkan Ghavami was able to help her alter her nose. The doctor, however, did not touch her body any more, as the Instagram influencer emphasizes, claiming that her physique is all-natural and genetic. Dr. Ghavami thanked the young beauty for boldly sharing the story on his Instagram account.

Losing her smile was the most traumatic event in her life, according to the Hispanic beauty. It was difficult for the girl who had always had a cheerful personality and enjoyed laughing to be unable to grin again. At the end of the intimate YouTube video, the social media star shared previous photos (pre-surgery) and expressed remorse for her decision to modify her face, pining for her genuine, natural look.