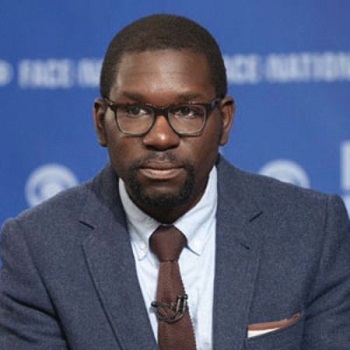 Jamelle Bouie is a journalist from the United States. He is a political commentator for CBS News and a columnist for The New York Times. He previously worked for The Slate and The Daily Beast, where he gained notoriety for his opinion pieces on the Ferguson riots of 2014, the Charleston church shooting of 2015, and the Black Lives Matter movement in general.

Jamelle Bouie’s age is unknown. Where did he get his education? Is he married or not?

He was born and raised in Virginia Beach, where he graduated from Floyd E. Kellam High School in 2005. In 2009, he graduated from the University of Virginia with a Bachelor of Arts degree in political and social philosophy and government.

Tess Bouie, Jamelle Bouie’s longterm lover, is married to him. Tess works as a teacher in a public school. Bouie and his wife have a son named Carter Bouie together.

Jamelle Bouie began her journalism career in 2010 with a writing fellowship at The American Prospect, right after graduating from university. In 2012, he was awarded a Knobler Fellowship at the Nation Institute for his work on The Nation, a weekly magazine.

He has been an opinion columnist for The New York Times since early 2019. Bouie has covered a wide range of topics in his media career, including sociopolitical issues, history, culture, and entertainment. Bouie, who is a person of color, also tackles the most pressing racial and cultural issues of the day.

The Ferguson riots of 2014, the Charleston church shooting in 2015, and the Black Lives Matter movement are among his most well-known reports, all of which deal with racial justice and equality.

Since 2015, Bouie has also worked as a political analyst for CBS News. He appears on Face the Nation, a weekly news morning show, on a regular basis.

Bouie is an amateur photographer when he is not working as a journalist.

What is Jamelle Bouie’s estimated net worth for the year 2020?

Jamelle Bouie is thought to have a net worth of roughly $300,000, according to certain web sources.

The 33-year-old is a political commentator for CBS News and a columnist for The New York Times. He had previously written for The Slate and The Daily Beast, covering themes as diverse as the 2014 Ferguson riots, the 2015 Charleston church shooting, and the Black Lives Matter movement.