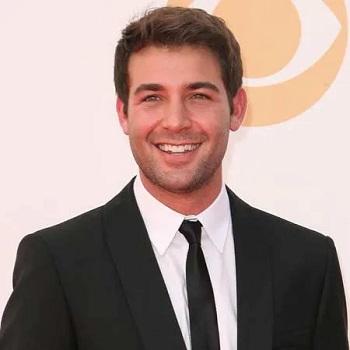 James Wolk is an accomplished American actor best known for his portrayal of Jackson Oz, a naturalist in the television series Zoo. Wolk, who played Zach Cropper, a copywriter on CBS’s The Crazy One, was also in the 2012 comedy picture For a Good Time, Call… Elizabeth Jae Lynch is Wolk’s wife. The couple married in 2015 and have a son named Charlie Wolk, who was born in 2017.

James Wolk was born on March 22, 1985, in Farmington Hills, Michigan, to Edie Wolk (an art teacher) and Robert Wolk (a shoe business owner). Aries is his zodiac sign. With his sister, Kate Ray Wolk, his parents reared him in Reform Judaism.

Wolk completed his education at North Farmington High School in 2003. He worked at his father’s store as a teenager and also performed as an emcee at Bar and Bat Mitzvahs. He also graduated from the University of Michigan School of Music, Theater, and Dance in 2007.

James Wolk’s Hollywood career began in 2006 with the film The Spiral Project. He then went on to work in short films such as Forgotten Land and 8 Easy Steps. In the comedy film For a Good Time, Call… in 2012, he plays Lauren Powell’s (Lauren Miller) ex-boyfriend.

Ari Graynor, Lauren Miller, Justin Long, and Seth Rogen starred in the film. A large number of audiences and critics praised his performance in the film.

The Standford Prison Experiment, This Is Happening, and Mercy are some of his other works.

Wolk made his television debut in the 2008 film Front of the Class, starring Patricia Heaton and Treat Williams, as Brad Cohen. Following that, he appeared in another TV movie, Solving Charlie. Robert Allen, a Texan con-man living a secret double life, was his first starring role in Fox’s TV series Lone Star in 2010. Adriana Palicki, Bryce Johnson, and David Keth shared the screen with him.

James Wolk’s net worth is believed to be $2 million. His acting career is his primary source of income. A TV star’s compensation, according to some web sites, ranges from $150k to $1 million.

Wolk is a member of the Brad Cohen Tourette Foundation’s Board of Directors. He also volunteers at “Program Twitch and Shouts,” a camp in Georgia for children with Tourette syndrome aged 7 to 17.