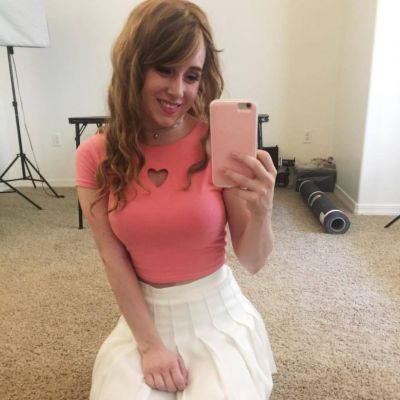 Do you know Who is Jellybeannose?

Heather Vaughn, commonly known as “Jellybeannose,” was born on June 21, 1990, in an undetermined place in California, USA, under the water sign of Cancer. She is a 29-year-old American dancer, K-pop fan, influencer, YouTuber, and social media celebrity. She gained to prominence after starting a Korean-themed channel on which she reviewed movies and practiced their language. Heather became obsessed with South Korean boy bands and began dancing to their songs as time passed. It wasn’t long before she caught the attention of fellow K-pop fans, causing her videos to go viral. She is also an active member of the Autonomous Sensory Meridian Response (ASMR) video community since she frequently posts ASMR-related content on her backup channel.

Jellybeannose stands about 5ft 7ins (170cm) tall. Her eyes are dark brown, and her hair alternates between blonde and brown. She has two tattoos, one on her right hip and one in the center of her chest.

Jellybeannose was raised in her birthplace alongside her sister Kristen. In one video, she stated that when she was 14, a friend introduced her to the world of K-pop.

Her obsession with Korea and everything related to it has been a driving force behind her career as an online star ever since. We do know she relocated across the nation for college, but she has never specified her college. Heather is a pretty private person in general; although always transparent when talking to fans and discussing her job, she never wanted to divulge anything about her personal life. Jellybeannose claimed in several Ask Me Anything (AMA) and Q&A sessions that she wanted to be remembered for her talents and accomplishments, not for her ‘dirty laundry.’

Heather formed NYX with two close friends, Bailey and Isabelle, while in college; all three females were obsessed with K-pop, which is why they started hanging out together in the first place. They practiced dance routines by groups like BTS, Big Bang, SHINee, and others in their leisure time. They quickly got excellent at duplicating these intricate dance techniques and began performing with other local dance groups. The three females intended to make their dance routines, similar to the one for “EXO () – Overdose ()” at one point. While Izzy, Bailey, and Heather were the group’s stalwarts, they also collaborated with several male dancers and other contributors.

By late 2015, the group had achieved international acclaim, having captured the hearts of K-pop fans from all around the world. Isabella abruptly stated on her Instagram feed that NYX would cease operations ‘for personal reasons.’ To this day, none of the former participants have revealed the details behind their collaborative project’s demise. Heather went on to become one of the most well-known cover dancers of all time. Because of the burgeoning popularity of K-pop, many of her videos received hundreds of millions of views in a matter of weeks. She not only sang the songs, but she also posted numerous vlogs chronicling her visits to Seoul and other locations in her ideal country.

She rose to prominence as a performer at K-CON, a yearly convention celebrating Korean music and culture that is held in either Los Angeles or Irvine, California. However, she hasn’t uploaded many videos in the last two years or so; her most recent video is “Favorite () – Loca Dance Cover [Jellybeannose].” She mentioned a few months ago that she no longer has time to do dance covers because she is focused on her career and creating her own business. There is nothing else on the subject because she is adamant about not sharing too much about herself.

Jellybeannose, an affluent successful dancer and ASMR-ist, has a net worth of around $200,000 as of August 2019. If her podcasting career takes off, her net worth might skyrocket shortly.

Jellybeannose previously had multiple boyfriends, most of whom were Korean in origin. Her partner is currently known to be a man named Jonathan van Arsdall. The two have been together for a little less than two years, according to reports.

Her official Facebook profile currently has 15,000 likes. She has 260,000 subscribers on her primary YouTube channel. But Instagram is by far her favorite social network, with only 17,000 people following her.