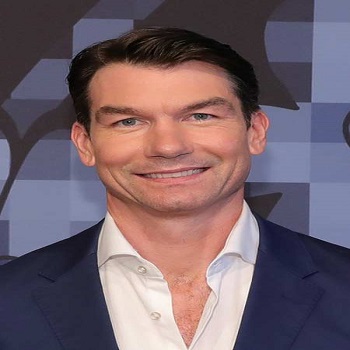 Jerry O’Connell is a talented American actor best remembered for his role as Vernon “Vern” Tessio in the film Stand by Me. For his role in the film, he received the Young Artist Award. In terms of television shows, he is best known for his performance as Andrew Clements (a 14-year-old kid) in CTV’s My Secret Identity, for which he was nominated twice for Young Artist Awards.
Scream 2, Kangaroo Jack, The Defenders, Piranha 3D, and Jerry Maguire are among his film credits. He has amassed a sizable net worth over the course of his 32-year career in the profession. O’Connell is married to Rebecca Romijn and has twin daughters, Dolly Rebecca Rose and Charlie Tamara Tulip O’Connell, with her.

His parents enrolled him in acting and fencing classes when he was a child. Connell went to Professional Children’s School and then graduated from New York University with a degree in film. He also studied screenwriting and was a member of the fencing squad while at university. He enrolled in Southwestern Law School in 2009 but dropped out to pursue his acting career.

The Career of Jerry O’Connell

Jerry O’Connell began his career by appearing in commercials for Duncan Hines Cookies and Frosted Flakes (1987).

In 1986, Jerry O’Connell made his Hollywood debut as Vernon “Vern” Tessio in Stand by Me, a coming-of-age drama film based on Stephen King’s novel The Body. Along with Jason Priestley, Gabriel Olds, Joe Pantoliano, and Kurt Fuller, he played Scott Foreman in the comedy-drama film Calendar Girls in 1993. In 1987, his performance in the film helped him earn a Young Artist Award.

Joe’s Apartment, Jerry Maguire, Body Shots, Mission to Mars, The New Guy, Buying the Cow, Yours, Mine, and Ours, Obsessed, and Wish Upon were among the films in which O’Connell appeared. He is particularly well-known for:

He is well known for his roles as Frank “Cush” Cushman in Jerry Maguire and as Derrick Jones in Piranha 3D. In the Justice League franchise, he voiced Clark Kent/Superman in Justice League: Throne of Atlantis, Justice League vs. Teen Titans, and Justice League Dark from 2015 to 2017. He recently voiced Superman in the film The Death of Superman.

In 1986, O’Connell made his television debut as Osborne in The Kingdom Chums: Little David’s Adventure. He then appeared in uncredited roles in a number of TV shows and films. Andrew Clements (14-year-old boy) in CTV’s TV series My Secret Identity was his first starring role in 1988. Derek McGrath, Wanda Cannon, and Marsha Moreau starred in the series.

TGIF, Blue River, Sliders, Night Vision, Ugly Betty, The Batman, Carpoolers, Fish Hooks, Billions, Mistresses, and Andi Mack were among the TV shows in which O’Connell appeared. He, on the other hand, is well-known for:

Jerry O’Connell’s net worth is unknown.

Jerry O’Connell has amassed a sizable fan base in addition to sizable net worth. O’Connell’s net worth is estimated to be $16 million as of 2018.

Here’s a rundown of his best-selling films that did well at the box office:

O’Connell is involved in a number of charitable endeavors. He hosted a show for The Christopher & Dana Reeves Foundation, a non-profit organization dedicated to finding treatments and cures for paralysis.

O’Connell is married to Rebecca Romijn, who he met on the set of Stand by Me (former model and actress). When Romjin was with her then-husband, John Stamos, they met for the first time at a party in 2004.

People asked O’Connell about their first meeting, and he said,

Despite their obvious chemistry, O’Connell revealed that nothing happened between them.

Romijn divorced Stamos in 2005. After their divorce, O’Connell began hanging out with her and soon began dating her. Their story was told by O’Connell.

“I spent the entire day with her and her companion. That night, a group of us went out to supper. It wasn’t even close to being a date. ‘Take her phone number,’ her companion, a guy, suggested to me. ‘I believe she intends to call you.’ It was something I was doing. I acquired her phone number and called her, and we met up in Los Angeles following her Vegas trip. We went for a walk.”

“I’d like to tell you about my wife, and she expresses it better than I do, but we met.” We began to hang out. I came to stay the night… I was never going to leave. That is the reality. We had an instant connection.”

In 2005, the couple confirmed their engagement after months of dating. During their trip to New York, O’Connell proposed to her. He stated,

“I can’t believe she agreed to marry me when I asked her.” I keep expecting Aston Kutcher to appear and inform me that I’m being ‘Punk’d.’

Finally, on July 14, 2007, the pair married in a secret ceremony in Los Angeles in front of 100 family and friends. On their wedding day, the bride wore a Ralph Lauren gown with Neil Lane jewelry.

The couple stated that they were attempting to conceive a few months after their wedding. A spokeswoman later confirmed Romjin’s pregnancy with twin girls. O’Connell mentioned having children in his speech.

“I’m overjoyed that I’m having girls.” ‘I want a boy,’ I know guys are supposed to say. I’d like to play baseball,’ but I believe I’d be better at raising daughters… I’m looking forward to it. They’re going to be a tough bunch of ladies. They won’t have sex with me till I’m dead. If they don’t date boys at all and are only interested in their father, that’s exactly what I’m want.”

Dolly Rebecca Rose and Charlie Tamara Tulip O’Connell were born on December 28, 2008, to the couple. Dolly, their first kid, is named after country artist Dolly Parton, while Charlie, their second daughter, is named after O’Connell’s brother.

The couple has been together for nearly a decade and has yet to face divorce rumors.

O’Connell formerly dated Giuliana Rancic, an American-Italian TV personality, from 2003 to 2004. Rancic accused him of cheating with Geri Halliwell, a singer, and songwriter after they split up. According to Rancic,

“Was it possible that I was being double-timed for one of the lesser Spices?”

She went on to say,

“He was as upset as the customer service guy who tells you your baggage didn’t make the trip.”

“For those who don’t know,” says the narrator. Giuliana Rancic is a celebrity who published a book about herself, and we dated and then didn’t date, and I was in the book.”

“I don’t want to say anything nasty,” says the speaker. She was a lovely young lady. We had a great experience. It had been decades.” (Actually, it’s been a decade.) I mean, I don’t think cell phones existed back then. I believe it was a horse and carriage. ‘It was, you know, a long time ago.’

He was also associated with a number of women, including Sarah Michelle Gellar, Estella Warren, and Debra Pelletier.