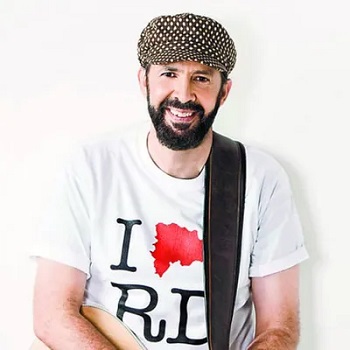 Juan Luis Guerra Seijas is a songwriter, producer, composer, and vocalist from the Dominican Republic. Guerra has sold over 30 million albums worldwide and has won numerous prizes, including two Grammy Awards, 18 Latin Grammy Awards, and two Billboard Music Awards.
He is also a well-known Latin artist on a global scale. Guerra’s unique Afro-Latin and meringue flair has made him a huge hit all across Latin America.

Juan Luis Guerra was born in Santo Domingo, Dominican Republic, on June 7, 1957, to Gilberto Guerra and Olga Seijas. He is of Dominican descent and of Caucasian race.

Juan Guerra studied literature and philosophy at the Universidad Autonoma de Santo Domingo. Later, he attended the EL Conservatorio Nacional de Musica de Santo Domingo, where he studied music theory and guitar. Guerra attended Berklee College of Music in Boston after graduating from Conservatorio and received a diploma in jazz composition in 1982.
Guerra’s debut album, “Soplando,” was published with local musicians upon his return to the Dominican Republic. Later, they were dubbed Juan Luis Guerra y 400. The number relates to the normal tuning of A440, and the band’s name is Cuatro Cuarenta in Spanish.

Juan Luis Guerra was signed to Karen Records in 1984 after performing in front of Dominican entrepreneur Bienvenido Rodriguez.

440 released the album Bachata Rosa in 1990, which was a tremendous hit and earned Guerra his first Grammy prize. With over five million copies sold, the CD enabled Juan Guerra to continue their tour throughout Latin America, the United States, and Europe.

He released another album, Fogarate, in 1994. The album focuses on Dominican music from the countryside and lesser-known genres, such as Perico Ripiao.

Guerra’s new album, Para, released in 2004 after a six-year hiatus. The songs on the albums are mostly for Christian audiences, and they have won two Billboard Music Awards in the categories of Gospel-Pop and Tropical-Merengue.

Guerra was also awarded by the Music Academy of Spain with the Latino Special Award for his contributions to Spanish and Caribbean music. Juan Guerra made records for the highest-grossing music tour when he opened for The Rolling Stones’ A Bigger Bang Tour in Puerto Rico in 2006.

Juan Luis Guerra makes a nice living as a performer, producer, composer, and songwriter, among other things. Guerra’s overall net worth  estimated to be $45 million as of 2018. Guerra has received numerous honors and nominations, including more than 15 Grammy nominations. After obtaining a Grammy award, a celebrity’s pay can climb by 100-300 percent.

SImilarly. he planned a concert on April 18, 2010, to raise money for Haiti’s earthquake victims. Guerra opened a children’s hospital in Haiti following the event’s success.