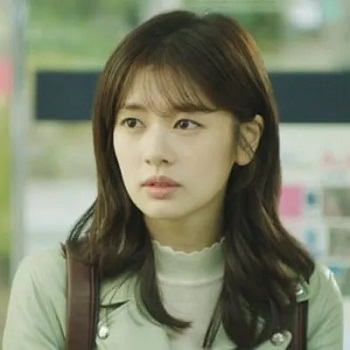 Jung So-min is a South Korean actress who has been on TV shows such as Playful Kiss, Big Man, and Standby. She also appeared in music videos for Seo In-guk and Noblesse’s hits.
So-min has won a number of honors for her work, including the 2nd Korea Jewelry Awards, the 6th Asia Model Festival Awards, the 18th Korean Culture and Entertainment Awards, and the 15th KBS Entertainment Awards.
Since October 2017, Jung has been in a relationship with actor Lee Joon.

Jung So-min was born Kim Yoon-Ji in Jinju, South Gyeongsang, South Korea, on March 16, 1989. She is of Asian origin and bears the nationality of South Korea. Jung’s father is one of the country’s wealthiest men and the CEO of a private corporation.

She had a passion for acting since she was a child and wanted to pursue a career in it, but her father was against it. Jung’s father provided her the opportunity to pursue acting as a career after she got a fully financed scholarship based solely on her acting abilities. Jung received his education from the Korea National University of Arts.

A Career of Jung So-min

In 2010, Jung So-min starred as Hong Mo-ne in the South Korean melodrama television series ‘Bad Guy,’ for which she received positive critical acclaim. She was cast in the romantic series ‘Playful Kiss’ the same year.

Jung So-min co-starred alongside Ryu Jin, Lee Ki-woo, Ha Seok-jin, and Kim Soo-Hyun in the 2012 South Korean sitcom Standby. She later starred as Jung Hye-Yoon in the South Korean television series Can We Get Married?

Jung So-min joined S.M. Culture & Contents in 2013 after leaving her talent agency Bloom Entertainment. In the same year, she played Ha-jin in the film Came to Me and Became a Star. In 2014, she appeared in two series: Miss Korea and Big Man.

Jung So-min, together with Kim Young-Kwang, Ha Seok-jin, and Kim Jung-Hwa, starred in the South Korean television series D-Day in 2015. She starred in two films in the same year, Twenty and Alice: Boy from Wonderland.

In 2016, she co-starred in the South Korean sitcom ‘The Sound of Your Heart’ with Lee Kwang-soo, which became a great hit in China and had over 100 million views on the internet. She went on to star in another drama special, Red Teacher.

Jung So-min was cast in the KBS2 television series “My Father is Strange” in 2017. She also played Won Do-Yeon in the comedy film ‘Daddy You, Daughter Me,’ in which she co-starred with Yoon Je-moon.

Jung So-min left S.M. Culture & Contents in the same year and joined Jellyfish Entertainment, a new management company. She next starred in the network’s love serial ‘Because This is My First Life,’ alongside Lee Min-ki. In 2017, she released a single called “Because You’re Here” as part of her series Because This Is My First Life.

Golden Slumber, a 2018 South Korean action thriller film starring Kim Dae-Myung, Gang Dong-won, Han Hyo-Joo, Kim Eui-sung, Kim Sung-Kyun, and Yoon Kye-sang, is one of her most recent acting credits. The film is based on the same-named Japanese novel authored by Kotaro Isaka in 2007.

Jung So-min received a Topaz Award at the 2nd Korean Jewelry Awards in 2010. For her portrayal in ‘Bad Guy,’ she received the 18th Korean Culture and Entertainment Awards in the category of ‘Best New Actress.’

Similarly, For her portrayal in ‘Playful Kiss,’ she was nominated for the 29th MBC Drama Awards in the category of ‘Best New Actress.’ She was named the New Star Award winner at the 6th Asia Model Festival Awards in 2011.’

For ‘Standby,’ she received the 12th MBC Entertainment Awards for Best Newcomer in a Comedy/Sitcom in 2012.

At the 15th KBS Entertainment Awards in 2016, Jung So-min and actor Lee Kwang-soo won the Best Couple Award for ‘The Sound of Your Heart.’ She was later nominated for an Excellence Actress Award at the 30th KBS Drama Awards for her performances in the short drama Red Teacher.

For her role in the South Korean television series ‘My Father is Strange,’ she received numerous nominations in 2017.

As the star of the film Because This is My First Life, Jung So-min has amassed a sizable fortune. Her current net worth is estimated to be around $6 million, according to sources, but this has not been confirmed officially.

She has been in a variety of television series as well as films. Twenty ($21.3 million), Daddy You, Daughter Me ($4.6 million), and Golden Slumber ($48,049) are some of her financially successful films.

Lee Joon, Jung So-co-star, mins is said to be dating her, which was formally disclosed in January 2018. They met on the set of My Father is Strange, according to sources, and began dating in October 2017.

She previously dated baseball player-turned-actor, Yoon Hyun Min, in 2015, but the relationship ended at the end of the year. Jung Kyung Ho, a South Korean actor who filmed dramas with both of them, introduced them.

Jung So-min and Yoon Hyun Min even attended the VIP conference and after-party for the film Clown of the Salesman together on March 7, 2015. Kim Hyun Joong was once linked to Jung So-min. The rumor began due to their on-screen chemistry in the South Korean love movie Playful Kiss. They, on the other hand, rejected the rumor.

Jung So-min enjoys traveling, as evidenced by her Instagram pictures. She also enjoys singing and playing the guitar. She also adores animals.