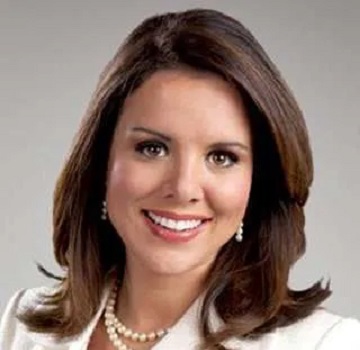 Kate Bilo is an American meteorologist who loves thunderstorms and reading. She is best known for her job as a chief meteorologist for CBS3. Before that, she worked as a meteorologist for AccuWeather and Bloomberg TV Network. During the Daytime Emmy Award-nominated talk show THE TALK, she also guest-hosted for CBS.

Every year, the woman from Philadelphia’s Phoenixville neighborhood was born in 1986 and celebrated her birthday on June 20. This means she has two bachelor’s degrees. She has a Bachelor of Science in Spanish from Penn State University, as well as one from Mississippi State University.
You can find out how much Kate Bilo is paid to be the Chief Meteorologist for CBS3.
AccuWeather hired the future meteorologist in State College in 2004 after she graduated from Penn State. As a forecaster for AccuWeather, she worked with FOX News, ABC News Now, and many other AccuWeather clients on TV and radio. It took her six years to work for Accuweather. In 2010, she became the main weather anchor on Bloomberg TV Network. When she joined the CBS3 team in October of 2010, she was in charge of the Eyewitness News weather team. It’s estimated that she makes an average of $77,592 a year as a chief meteorologist for CBS 3.

When Bilo is married to someone, who is her husband?

Kate has been married to her husband, Scott Eby, a software engineer, since August 31, 2007. They’ve been very happy together. This year, the couple celebrated their eleventh wedding anniversary. There have never been rumors of divorce or an affair between the two of them after getting married. Kate Bilo was taken to the hospital after giving birth to her third child.
Kate didn’t have an easy time getting pregnant the third time she tried to have a child. Before she gave birth to her second child, Anders, a Lansdowne, Pennsylvania man sent her threats on Twitter. He said he would kill her in front of her son, Leo, if she didn’t give birth.

However, the man who was creepy was found and sentenced to five years in federal prison, but that’s not all. Another problem came up after she gave birth to her daughter Solenne in 2017. She hurt herself when she tried to pick up her newborn baby.
But when taking an Advil didn’t help, she was taken to the hospital. They later discovered that she had a lung embolism (a condition where multiple arteries in the lungs get blocked by a blood clot). Kate has been through a lot, but we can say that she is safe, alive, and healthy right now.