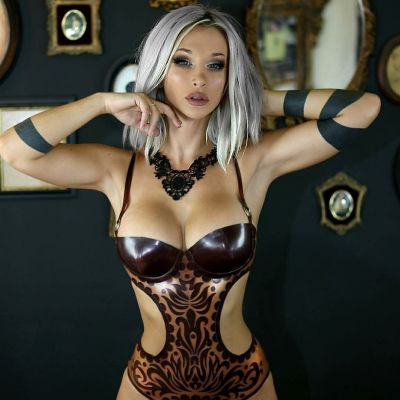 Do you know Who is Kate Lambert?

She Lambert, better known as ‘Kato,’ was born on September 16, 1983, in Wales, United Kingdom, under the zodiac sign of Virgo and with British nationality. Kate is well-known for her modeling career, but she is also an entrepreneur, fashion designer, and singer.

She spent her entire childhood in Wales with her family, and she has art in her blood because her father, Terence Lambert, is a well-known wildlife painter, and her mother is a school principal. Kate has three sisters, one of whom is her younger sister.

She grew up in a house provided by the church for her family; the house was built and decorated in Victorian style and is located directly behind a cemetery, which Kate attributes to her interest in the Victorian era (which lasted from 1837 to 1901 during the reign of Queen Victoria).

Kate dropped out of high school when she was 16 years old, but later enrolled at a college where she was able to finish her final two years of schooling while specializing in art. Kate fell in love with fashion and enrolled in fashion classes at the South West Wales School of Art, where she began her career as soon as she graduated.

Kate founded her own business, “Mishka,” as soon as she received her bachelor’s degree; her business was put online as she sold the dread hair falls she made all by herself on the internet.

Kate’s modeling career was officially launched when she began posing for the Toxico brand alongside popular models Ulorin Vex and Chad Michael Ward. It only took her about a year of modeling for her to feel ready to work on designing her clothes, and she began making her Victoria-oriented clothes in 2004.

Kate used herself as her main model and uploaded the pictures to her MySpace account – it took some time for her to become recognized, and her style was later labeled as “steampunk style” by Magdalene Veen, the ex-vocalist of the popular “Abney Park” band.

Satisfied with the sound of steampunk,’ Kate launched her own steampunk clothing company called “Steampunk Couture” in 2007, which was the world’s first and only steampunk clothing business at the time. Around the same time, Kate launched the website “Toy Soldiers Unite!” which was a fan club of the popular singer Doctor Steel – she was then asked by Doctor Steel to create uniforms for the entire club, as well as outfits for those dancing on stage with him. Kate stopped running the website after Steel retired.

She has been unsuccessful in keeping all of her matters, including her marriage, to herself. Kate and Doctor Steel (Rion Vernon) fell in love after working together, and after years of dating decided to exchange wedding vows. Only the two’s most devoted fans were aware of their marriage, which was then taken to the Reddit.com website, where everything was made public – some girls have claimed to have dated Kate in the past, making her bisexual, but Kate has not confirmed this.

She and Doctor Steel have no children; they appear to have an ‘open’ marriage in which they are free to date whomever they want.

Kate hasn’t discussed her marriage with Doctor Steel, or any other men she may have dated before him – judging by her social media accounts and internet posts, Kate is currently married to Doctor Steel, her first husband, and the two don’t appear to be planning on starting a family together.

Kate’s current net worth is estimated to be more than $2 million, and it is steadily increasing as a result of several projects she is currently working on.

Kate is very active on several popular social media networks, which is critical for the promotion of her work. She started her Twitter account in August 2008, and she now has over 14,300 followers and has tweeted over 3,200 times. She is much more popular on Instagram, where she has over 415,000 followers and has uploaded over 550 photos – Kate also has a Facebook page, but it currently has only about 200 people following her.