Katie was recently tagged in a photo by Luca DelPiccolo, the brother of footballer Paolo DelPiccolo, in which the footballer is on one knee, potentially proposing. 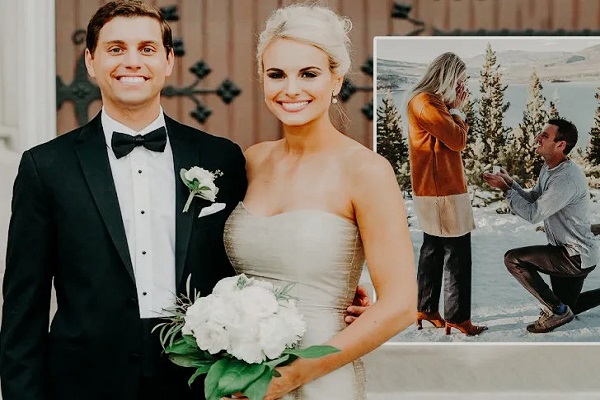 Katie George, a sports presenter, has kept her love life a closely guarded secret. She has stated being in a relationship in interviews a few times, but there is little to no information on her social media profiles.

Katie’s relationship with footballer Paolo John Prince DelPiccolo was exposed in a recent photo that she was tagged in.

Katie was recently tagged in a photo by Luca DelPiccolo, the brother of footballer Paolo DelPiccolo, in which the footballer is on one knee, potentially proposing.

Luca included photos of his child, himself and his wife, and his footballer brother proposing to Katie in the message.

“2020 highlights” was the caption on the post, which was published on January 2, 2021. The couple has been engaged since 2020, according to this. However, there has been no word on their wedding or marriage.

Katie had been doing an excellent job of keeping her privacy intact before and after the picture of the proposal went viral.

In many of her articles, the sports anchor has used comedy to hide her dating status. She is shown in a group with a couple of her friends in a few of them. The anchor is seen hugging trees and kissing wine glasses in these photos, referring to them as her love.

However, the former Miss Kentucky USA stated in an interview with StyleBlueprint that once the volleyball season is over, she hopes to visit her boyfriend’s family in Denver. The anchor also stated that the couple enjoys outdoor activities such as skiing, snowboarding, and hiking.

A tagged image of Katie with a bunch of pals is linked to this information. The photo was shot after they had gone skiing. Paolo was one of the persons that was accidentally tagged in the photo.

History of Katie and Paolo

In contrast to Katie’s Instagram, her boyfriend Paolo’s account features some images of the couple dating back to 2015.

The gorgeous couple was seen in a loving hug in a photo posted to the professional footballer’s official Instagram account. Naturally, they were both beaming for the camera. In addition, the message proved their relationship, as the footballer hailed Katie as his “boo” and thanked her for the birthday weekend.

On her birthday, Paulo expresses his love

Paulo, predictably, also posted a now-deleted birthday message for his beloved. The couple posed for the camera in similar black and white attire in a December 2015 post. With her hand on her waist and her lovely boyfriend wrapping his arms around her, the former Miss Kentucky USA posed like a diva.

In addition, the dashing hottie confessed that they had been dating for three years and that he adored her. Unfortunately, the couple did not celebrate their birthday together, so the boyfriend was looking forward to seeing the lovely blonde, according to the post.

In addition, the player recently shared a video of the couple on his Twitter account. The two are shown in the video playing Spatnis, a new game they devised in which they play tennis with spatulas.
Despite the fact that no news of the cute pair getting married has made the rounds, it appears that wedding bells are on the way.