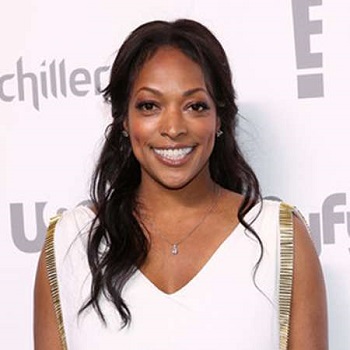 Kellita Smith is an actress, model, and comedian from the United States. Smith is most remembered for her role as Wanda McCullough in The Bernie Mac Show on television. She starred in The Preacher’s Son, a TV movie, in 2017. Since 2014, she has played a leading part in the action/comedy/horror drama Z Nation. The show is currently in its fifth season on the Syfy channel.

Kellita Smith was born in Chicago, Illinois, in the United States on January 15, 1969. Smith is Honey Smith’s daughter. Her brother and she grew up in Oakland. She is an American and a member of the Afro-American ethnicity.

Smith is born under the sign of Capricorn. Eric Smith is Kellita’s younger brother. Santa Rosa Junior College was Smith’s alma mater. The college awarded her an associate’s degree in political science. Her first job was as a model.

Kellita Smith started out as a model. Her acting career began on stage, with her initial appearances in regional performances of Tell It Like It Iz. She later appeared in a number of theater productions, including No Place to Be Somebody, Feelings, and others.

Smith first appeared on television in 1993 as part of the American sketch comedy series In Living Color.

She also played Susan in an American television sitcom called Living Single later that year. She also had a recurring role on the American sitcom Martin as Tracy, in which she appeared in ten episodes.

Smith made her television debut in 1996, appearing in The Wayans Bros., Dangerous Minds, and Moesha, among other shows. Smith appeared in four episodes of the American sitcom Malcolm & Eddie as Danielle.

Smith starred as Wanda McCullough in the American sitcom The Bernie Mac Show, which premiered in 2001. For her role in the series, she was nominated for numerous accolades, including the NAACP Image Award and the BET Comedy Award.

She appeared in the first and second seasons of The Bernie Mac Show. Bernie Mac, Jeremy Suarez, Dee Dee Davis, and Camille Winbush were among the guests.

Smith’s other notable television performance is in the American sitcom The First Family when she played First Lady Katherine Johnson (2012-2015).

Smith has been starring alongside DJ Qualls, Michael Welch, Keith Allan, Pisay Pao, and Nat Zang in the action/horror/drama series Z Nation since 2014.

Smith starred in the television film Sharkando 3: Oh Hell No! in 2015. On February 5, 2018, her drama film The Choir Director was released. On October 5, 2018, the fifth season of Z Nation will premiere. In 2017, the actress won a role in The Preacher’s Son, a TV movie in which she co-starred with Christian Keyes, Clifton Powell, Valarie Pettiford, Drew Sidora, and other actors.

Kellita Smith’s Salary And Net Worth

According to celebrity net worth, Kellita Smith has a net worth of $3 million as of January 2019. She has amassed a sizable fortune from her varied performances in films and television series. Her compensation for the TV show Z Nation is $30 thousand every episode. An American TV celebrity gets $30K-$80K every episode, according to a source, so we may assume she earns something in that area as well.

Kellita Smith is an unmarried woman. She is not in a relationship (at least publicly). Smith’s present relationship status is assumed to be single because she has not spoken to the media about her personal life in depth, thus there is no formal confirmation from her end. However, in 2015, The Bossip stated that she was discovered in Beverly Hills on a dinner date with Mr. Chow.

Kellita Smith is devoted to her family and frequently posts photos of them on Instagram. During her free time, she spends a lot of time with her brother and friends.

Though Smith has kept her personal life private, there have been speculations of her hooking up with Mr. Chow after they were seen together in Beverly Hills. She stated in an interview that The Bernie Mac Show is the best acting memory she has ever had.

In another interview, the actress revealed that she struggled with emotional eating in the past and that it was a particularly difficult time for her when she was in public. She gained weight as a result of this behavior. She went on a low-carb diet and lost weight as a result.

Smith, who is also a supermodel, attends various fashion events and has been featured in several fashion magazines in addition to acting.