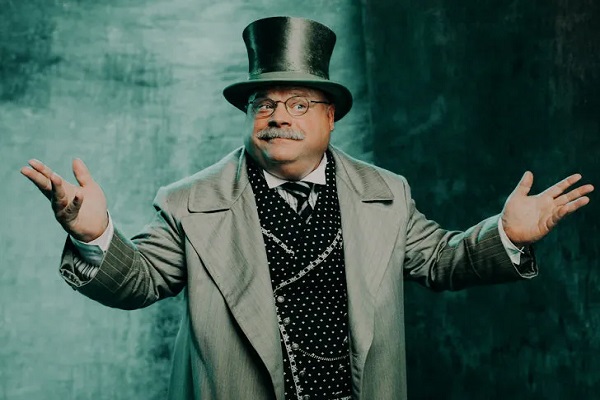 Kevin Chamberlin is one of those celebs who has overcome his hesitation about his identification and now appears to be a proud homosexual man.

While The Addams Family actor prefers to keep his private life under wraps, he offers hints regularly regarding his marital status.
In a 2010 interview with the Windy City Times, Chamberlin confessed being in a relationship with a companion who worked as a TV writer.
While the interviewer claimed that there would be more prospects for him in California, he remarked that Los Angeles was not a big theater town. “My partner is a television writer, so he is doing pretty well out there,” he added.

He elaborated that the two have switched roles; he was the earner in New York, as his partner was in California.

The theater great took to Twitter on June 26, 2015, to share his excitement over the Supreme Court’s decision to legalize homosexual marriage in the United States. He hailed the day as a significant event in the country’s history and an example for the next generation.
He wrote, “Yes, I am happily married,” in one reaction to his post.
The post further added to the intrigue surrounding his dating life. However, he has given no additional specifics concerning his marriage, his partner, or his wife so it’s unclear whether the tweet was real.

Chamberlin Played A Gay Role in ‘The Ritz’

The Ritz, a Broadway musical, depicts the story of a family man from Ohio who, while escaping his homicidal brother-in-law Carmine Vespucci (Lenny Venito) mistakenly seeks sanctuary at a gay bathhouse in the 1970s. Chamberlin portrayed the character of Guitano Proclo in the humorous piece.
Besides that, his work on stage has earned him three Tony Award nominations and three Desk Award nominations for Dirty Blonde as Charlie, Seussical as Horton, and The Addams Family as Uncle Fester.

Some of his other Broadway credits include significant acts like Disaster!, Chicago, Triumph of Love, and My Favorite Year.

Besides his success in theatre, he also has a handful of cinema and television credits under his belt.
Some of his best appearances include TV series like A Series of Unfortunate Events, Modern Family, Frasier, Grace and Frankie, and Disney Channel’s Jessie!
He also made appearances in movies like Die Hard With a Vengeance, Road to Perdition, Taking Woodstock, Suspect Zero, Christmas With the Kranks.

In 2019, Chamberlin starred in a sci-fi musical comedy titled Little Shop of Horrors as Mr. Mushnik alongside George Salazar, Mj Rodriguez, Amber Riley, and Matthew Wilkas at the Pasadena Playhouse.
Recently in 2020, the actor was one of many TikTok stars who became an online meme based on the 2007 Disney/Pixar film Ratatouille.

Also, in December 2020, Chamberlin was announced as Gusteau in a benefit concert presentation of the musical. The concert was broadcasted on TodayTix on January 1, 2021.

The actor, who wowed audiences with his brilliant performances, is still a popular figure in Hollywood since his followers are unconcerned about his orientation.