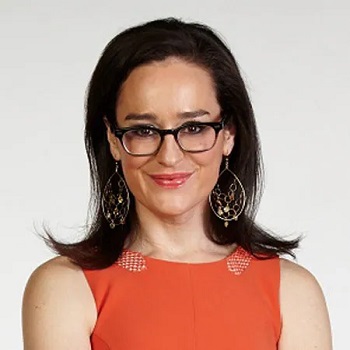 Lisa Kennedy Montgomery is a former MTV VJ and radio presenter in the United States. She is also a political satirist. On the Fox News Channel, she presents the show Outnumbered on occasion. She currently presents a Fox Business Network show called Kennedy. In the 1990s, she also hosted a late-night show called Alternative Nation.

Montgomery is a mother of two children and is married. She has two daughters with Dave Lee, a former competitive snowboarder.

Lisa Kennedy Montgomery was born in the city of Indianapolis, Indiana, on September 8, 1972. She grew up with her two brothers in Lake Oswego, Oregon. Kennedy was born in the United States and comes from a White American ethnic background.
Lisa Montgomery was a Lakeridge High School student. She obtained a bachelor’s degree in philosophy from the University of California, Los Angeles, in 2005. Lisa finished her internship at the Los Angeles radio station KROQ-FM.

Lisa Kennedy Montgomery became a VJ for MTV a year later. She worked there for numerous years. She eventually went on to work for MTV as the anchor of the Alternative Nation show.

Lisa Montgomery published a book called ‘Hey Ladies! Tales and Tips for Curious Girls’ in 1999. She relocated to Seattle in the same year to work as a host on KQBZ’s ‘The Buzz.’ The show was a mix of news, comedy, and local issues. Lisa departed Seattle in 2001 to work as a co-host on the Comedy World Radio Network’s morning show with Ahmet Zappa.

The show’s name was The Future with Ahmet & Kennedy, and it featured current events with a comedic spin as well as news. She later co-hosted a morning show on the network called The Big House in Malibu.

Lisa Montgomery presented a game show called Friend or Foe? that debuted on Game Show Network on June 3, 2002, and lasted two years. On April 1, 2003, she appeared as a guest host on GSN’s WinTuition, which was formerly hosted by Marc Summers. She’s also the host of the GSN show “Who Wants to Be Governor of California?”

Lisa Montgomery became a contributor to FOX Business Network in 2012. On the network, she also anchors a prime-time show that airs Monday through Thursday at 8 p.m. ET. She also contributes to both Reason TV and Reason.com. Lisa is also a guest host on KFI AM 640 in Los Angeles on occasion.

Kennedy was a correspondent for the Fox Business talk show Stossel and a panelist and guest host on Fox News’ Red Eye on occasion. She’s also appeared on other Fox talk shows, including Outnumbered and The Five.

Lisa Kennedy Montgomery makes a nice living from her long-running career. Her exact net worth, however, is unknown. However, according to several web sites, her net worth is estimated to be over $2 million.
According to a source, Fox Business pays its correspondents an annual compensation ranging from $70,000 to $90,000. As a result, we may estimate her salary to be somewhere in the above categories. On July 30, 2013, she released her book The Kennedy Chronicles: The Golden Age of MTV Through Rose-Colored Glasses. On Kindle, the book costs $6.79, while in hardcover, it costs $39 dollars.

The Personal Life And Affair Of Lisa Kennedy Montgomery

Lisa Kennedy Montgomery is a woman that has been married for a long time. In the year 2000, she married her lover Dave Lee. Her husband was a professional snowboarder in the past. Pele Montgomery and Lotus Montgomery are the couple’s two daughters. To date, the couple has been happily married.

Lisa Montgomery is a Republican who styles herself as a Republitarian. She is a Libertarian who is registered as a Republican. She was a strong supporter of Gary Johnson’s presidential candidacy in 2012.

Prior to her romance with Dave, political commentator Lisa was in a relationship with Goo Goo Dolls frontman and guitarist John Rzeznik. He’s also created a song titled Name, which is dedicated to her.

Lisa Kennedy Montgomery is 46 years old as of 2019.
Virgo is your zodiac sign.
She stands at a height of 4 feet and 10 inches (1.47m).
Her physical weight is approximately 59 kilograms.
Her dark brown hair is lengthy and she has a dark brown complexion.
The tone of Her Eyes: Her eyes are a light brown color.