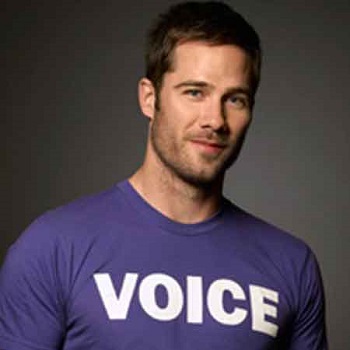 Luke Macfarlane, a Canadian actor, and singer has been working in the entertainment sector since 2003 and is regarded as one of the most successful Hallmark actors. Scotty Wandell on the ABC television drama Brothers & Sisters (2006–2011) and Private Frank “Dim” Dumphy in the short-lived FX series Over There (2005) are two of his most well-known performances. In his eighth grade at the Lester B. Pearson School for the Arts, he was also the lead singer of the band Fellow Nameless, performing under the moniker Slipnaught.

Luke Macfarlane was born on January 19, 1980, in London, Ontario, Canada, under the zodiac sign of Capricorn. He is of mixed origin and has Canadian citizenship.

MacFarlane is the son of Thomas and Penny MacFarlane. His father worked as the Director of Student Health Services at the University of Western Ontario, and his mother, Penny, is a mental health nurse in a London hospital. Ruth MacFarlane, his twin sister, and Rebecca, his older sister, are his siblings.

He began working as an actor for a local theater shortly after finishing high school. Later on, he began auditioning for television and film jobs.

TV shows and movies are my main sources of income.

Luke Macfarlane began his acting career in the 2005 American action/drama/war television series Over There, where he played PV2 Frank “Dim” Dumphy. He later participated in Robert Altman’s miniseries Tanner on Tanner alongside Cynthia Nixon.

Scotty Wandell, Macfarlane’s first major role, was on ABC’s Brothers & Sisters from 2006 through 2011. He also starred alongside Sun Li, Sam Neill, Peter O’Toole, and others in the two-part miniseries Iron Road.

Other prominent parts include Rick Lincoln on NBC’s The Night Shift, Jason Howell on Satisfaction, Chaplain Hopkins on PBS’ Mercy Street, D’avin Jaqobis on Syfy’s Killjoys, and many more.

In addition, he has appeared in a number of theater plays, including Juvenilia, Where Do We Live, The Busy World is Hushed, and Dreamstuff, Reverberation, among others. Just Add Romance is his future project.

Macfarlane is a singer and composer in addition to acting. Under the name Slipnaught, he was the lead vocalist of the band Fellow Nameless when he was in eighth grade at the Lester B. Pearson School for the Arts.

Sources Of Earnings And Net Worth

Luke Macfarlane is a successful actor who earns a lot of money. His earnings are primarily derived from his appearances in films and theater productions. He’s also a vocalist and has a few commercials and endorsement deals under his belt.

Macfarlane is predicted to have a net worth of $2 million as of 2021. He was cast in the biographical drama film Kinsey in 2008, which became an instant hit at the box office, generating over $16.9 million despite a production budget of roughly $11 million. He appeared alongside Liam Neeson, Laura Linney, Chris O’Donnell, and Peter Sarsgaard in the film.

Is he in a relationship with someone?

Luke Macfarlane is openly gay, as he revealed in an April 2008 interview with The Globe and Mail. He has had relationships with a number of celebrities.

Charlie David, Macfarlane’s first lover, is a Canadian actor, screenwriter, director, and producer. His most well-known relationship is with Wentworth Miller, an American actor, and model best known for his part in the hit TV show Prison Break.

Wentworth and Luke have been covertly dating for about six months; they’ve kept their relationship hidden, presumably since Wentworth is still in the closet.

After the couple split up for an undisclosed reason, Macfarlane began dating Chad Slivenski, a semi-professional wrestler-turned-actor, although the relationship was short-lived.

TR Knight, with whom he had previously been involved. He is presumably single as of 2021, as no speculations of him being with anyone have surfaced.

Luke Macfarlane’s stature: he stands at 6ft 2 inches tall (1.88 m).
He will be 41 years old in 2021.
His physical weight is approximately 77 kilograms.
Thomas Luke Macfarlane Jr. is his given name.
Horoscope: Capricorn
His hair is light brown and he wears it down.
His eyes are a bright blue color.
Canadian nationality
North American ethnicity

1. What is Luke Macfarlane’s net worth?

Macfarlane is predicted to have a net worth of $2 million as of 2021. His earnings are primarily derived from his appearances in films and theater productions. He’s also a vocalist and has a few commercials and endorsement deals under his belt.

2. Is Luke Macfarlane’s brother, Seth Macfarlane, connected to him?

Seth Macfarlane is an actor, writer, and singer from the United States. People sometimes mistake them for siblings since they share the same surname, although they are not related. In reality, neither of them has any brothers or sisters.

3. Is it true that Luke Macfarlane can play the cello?

Luke has frequently played Cello in his various film roles. He is a cellist with a classical background.