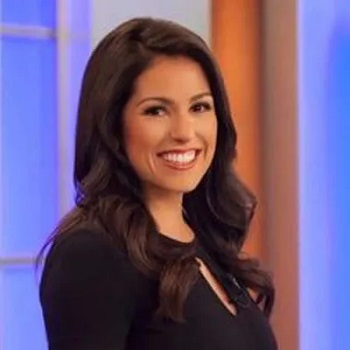 Marley Kayden is a professional musical theater actress and an American journalist. She is a multimedia journalist located in Chicago who focuses on broadcast and business news reporting. She is currently employed as a Weekend Traffic Anchor at NBC 5, which broadcasts on WMAQ-TV.
Kayden is also a CBOETV correspondent and the host of Marley Kayden’s Most Actives, a show that covers the day’s most actively traded options contracts.
She is married and the mother of two children.

Kayden grew up in the city of Chicago, Illinois. Her youth was spent in her hometown. Marley Kayden earned a Bachelor of Arts in Music Major/ Drama Minor from the University of Virginia in May 2007. With a 3.7 GPA, she graduated with honors.

She graduated from Northwestern University’s Medill School of Journalism with a Master of Science in Journalism in June 2013. She was a Medill Ambassador and a Medill Alumni and Medill/NU Scholarship, recipient.

Marley Kayden began her acting career on the stage and in the theatre. She was crowned Miss New York Teen in 2002. Jergens, Huggies, Energizer, Food Network, PCC Wireless/T-Mobile, Diageo Brands, PUR, Oneida Silver, Welch Allyn Medical, and Rockstar Games were among the companies for whom she performed in Equity theaters, commercials, and television.

Marley Kayden also works as a tutor for grades 4 to 12, Standardized Test Preparation (SAT, ACT, ISEE, SSAT, SHSAT, SAT II), and New York State Regents Preparation to make the most of her free time and resources.

A Career in Journalism

Marley Kayden got her first work in journalism in January 2008 and has made it her main career ever since. She served as a co-anchor of “Stocks Today” for Wall Street Media in New York, where she broadcast daily financial news, interviewed CEOs and company leaders, and traveled around the United States covering financial conferences.

Kayden worked for the Medill News Service as a Business Reporter in 2012. She used her musical talents to work as a theater and classical music reporter for Chicago Music at the beginning of 2013, covering a wide range of topics from live theater to contemporary music concerts.

Kayden then worked as an on-air intern for the Tribune Company. She moved to Bloomberg News in June 2013, where she worked as a commodities correspondent, covering agricultural commodity markets on a daily basis in both written and on-air coverage.

Marley Kayden has been the host of Chicago Board Options Exchange’s ‘Most Actives With Marley Kayden’ since October 2013. She broadcasts live from the CBOE trading floor daily coverage of the most active stock options.

Since November 2013, she has also worked as a Weekend Traffic Anchor for Radiate Media at WMAQ-TV. She was also the co-host of WMAQ-“Chi-Town TV’s Rising” New Year’s Eve Broadcast.

She also produced and directed the documentary The 100th Day: Unknown Territory, which earned the NATAS Chicago/Midwest Emmy Award for Excellence in the Long Form category.

Marley Kayden, a former actress who went on to become a journalist, makes a good living. According to a source, NBC Chicago anchors make between $30K to $197K depending on their experience and abilities. As a result, she is a seasoned anchor who has bagged anywhere in the aforementioned range.
As an Emmy award winner, Marley Kayden has gained notoriety and accolades. At the NATAS Chicago/Midwest Emmy Awards, she won for ‘The 100th Day: Unknown Territory,’ a documentary she filmed, edited, and produced. In 2015, she was also nominated for an Emmy.

Journalist Marley Kayden’s Personal Life Marley Kayden is a married woman with two children. She has been married to her boyfriend, who has since become her husband, for a long time. Her family and she live in River North, California. Her husband and she have a child together. She has never spoken publicly about her marriage or children.

She is also a dog enthusiast. Kayden has adopted a few of the pets she has rescued. Her family is very important to her. Kayden spends her free time listening to rock and country music. Pearl Jam is one of her favorite rock bands.