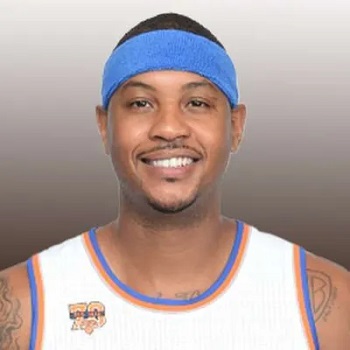 Mary Anthony and Carmelo Iriarte gave birth to Carmelo Kyam Anthony on May 29, 1984 in Red Hook, New York City, New York, United States. Carmelo’s mother is African-American and his father is a Black Puerto Rican. Robert, Wilford, and Carmelo’s half-sister Daphne occupied the majority of Carmelo’s childhood days. When he was eight years old, his family relocated to Baltimore.

Carmelo Anthony went on to Towson Catholic High School in Towson, Maryland. He began playing basketball and was even voted the metro Player of the Year by The Baltimore Sun. Soon after, he joined Oak Hill Academy and scored 25.2 points in a game. After that, he enrolled at Syracuse University.

Carmelo Anthony first caught the attention of the NBA in 2003, when the Denver Nuggets selected him third in the first round. He continued to play for the Denver Nuggets until 2011. Carmelo Anthony is a small forward. He went on to play with the New York Knicks in 2001. In 2008, 2012, and 2016, he won three gold medals in the Olympic Games. He also won gold in the 2007 Americas Championship in Las Vegas.

Carmelo Anthony has received numerous awards throughout his career, including the USBWA National Freshman of the Year in 2003, NCAA Final Four Most Outstanding Player in 2003, NCAA champion in 2003, NBA scoring champion in 2013, NBA Rookie Challenge MVP in 2005, USA Basketball Male Athlete of the Year in 2006, and nine NBA All-Stars from 2007 to 2008 and 2010 to 2016, among others. He has excelled in athletics and is a source of inspiration for millions.

Carmelo Anthony is married to La La Anthony at the moment. The couple got engaged in 2004 and married in New York’s Cipriani’s on July 10, 2010. La La is an American radio and television personality, author, businesswoman, producer, and actor who is well-known for her outstanding work. On March 7, 2007, the couple welcomed a boy named Kiyan Carmelo Anthony into the world. There have been no rumors of extramarital affairs.

Carmelo Anthony is a 32-year-old basketball player who measures 6 feet 8 inches tall. He is of African descent. Carmelo’s weight has been estimated to be 109 kilograms. Carmelo has been accused of being in possession of marijuana and driving while intoxicated on several occasions. Carmelo Anthony’s annual salary is $ 24.56 million. Because of his deal with the New York Knicks and his multiple sponsorships, his net worth is believed to be $90 million.