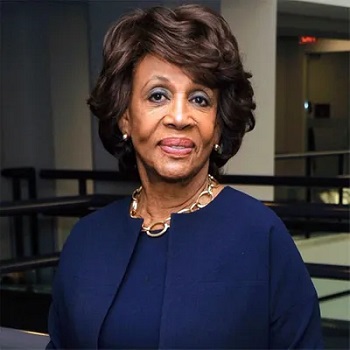 Maxine Waters is the representative for California’s 43rd congressional district in the United States Congress. Since 1991, she has been a member of Congress. Many people believe her to be one of the most powerful women in American politics right now.

Waters is the most senior of the 12 black women currently serving in Congress, as a member of the Democratic Party. She is also a member of the Congressional Black Caucus and its former chairwoman. She has two children and has been married twice in her personal life.

Maxine Moore Waters was born on August 15, 1938, in St. Louis, Missouri. Remus Moore and Velma Lee Carr Moore were her parents. She is the sixth kid in a family of thirteen. After her father abandoned them when she was two years old, she was raised solely by her mother.

Waters graduated from Vashon High School in St. Louis, Missouri, before moving to Los Angeles, California with her family in 1961, according to her bio. In her early years, Waters worked at a textile factory and also as a telephone operator. In 1996, she served as an assistant teacher in the Watts Head Start program. Waters went on to Los Angeles State College to study sociology and graduated with a bachelor’s degree.

The Career of Maxine Waters

Maxine Waters was the chief deputy to City Councilman David S. Cunningham, Jr. in 1973. In 1976, she was elected to the California State Assembly. Waters advocated for the separation of state pension funds from any business activity in South Africa, which was then operating under apartheid policies. Waters also assisted in the passage of legislation that followed the Sullivan Principles of the divestment campaign. She rose to become the Assembly’s Democratic Caucus Chairwoman.

House of Representatives of the United States of America

Maxine Waters was elected to the United States House of Representatives for California’s 29th congressional district with a vote total of over 79 percent following the retirement of Augustus F. Hawkins in 1990. Waters has been re-elected in California on a consistent basis, with the 35th District renumbered as the 35th in 1992 and the 43rd in 2012.

On July 29, 1994, Maxine Waters made headlines when she interrupted Peter King’s speech. Carrie Meek, the presiding officer, described her behavior as “unruly and agitated,” and threatened to have the Sergeant at Arms present her with the House of Representatives Mace. Maxine Waters was kicked out of the house for the remainder of the day in 2017. It was the most recent incident of the mace being used to enforce discipline. The fight with King began on the first day of the hearing, when they were both present for a House Banking Committee hearing on the Whitewater scandal.

From 1997 to 1998, Maxine Waters was the chair of the Congressional Black Caucus. She testified in 2005 before the United States House Committee on Education and the Workforce on ‘Enforcement of Federal Anti-Fraud Laws in For-Profit Education,’ mentioning the American College of Medical Technology. Waters was involved in a controversy about King-Drew Medical Center in 2006. She also slammed the hospital’s coverage in the media. In 2006, she petitioned the Federal Communications Commission to deny KTLA-TV a waiver of the cross-ownership ban and a license renewal.

Waters became the ranking member of the House Financial Services Committee in 2012, following the retirement of Barney Frank. She voted in favor of Amendment 100 in H.R. 2397, the Department of Defense Appropriations Act of 2014, on July 14, 2013.

The Los Angeles Riots And The Rodney King Verdict

Maxine Waters received national notoriety when she assisted in the delivery of relief supplies after the Rodney King judgment in 1992, when riots erupted in south-central Los Angeles, killing fifty-eight people. She also ordered that essential services be restored.

She described the riots as a form of revolt, adding, “Calling it a riot makes it sound like a bunch of crazies went out and did awful things for no cause.” It was understandable, though not acceptable, in my opinion.”

Following a 1996 San Jose Mercury News article alleging the CIA’s involvement in the Los Angeles crack epidemic in the 1980s, Waters was urged for an investigation. After conducting its own investigation, The Los Angeles Times came to the conclusion that the evidence did not support the claims.

Before his death in 2004, Gary Webb, the author of the original piece, was reassigned to a different beat and removed from investigative reporting. He was discovered dead in his apartment, his head pierced by two bullets. His death was officially ruled a suicide.

Following the post-publication investigations, Maxine Waters read a memorandum of agreement into the Congressional Record. Ex-President Ronald Reagan’s CIA director rejected any obligation for the CIA to report unlawful narcotics providing to the Department of Justice in the memorandum.

According to Chuck Neubauer and Ted Rohrlich’s article in the Los Angeles Times in 2004, Waters’ relatives profited more than $1 million over the previous eight years by doing business with candidates, companies, and causes that she had aided. They claimed that Waters and her husband aided a company in obtaining a government bond contract, and that her son Edward Waters and daughter Karen Waters benefited from her ties.

Waters was investigated for ethics infractions, and a House subcommittee accused her of at least one of them in connection with her efforts to help OneUnited Bank secure federal funding. Her spouse is a OneUnited Bank owner and former director, and the bank’s executives were substantial campaign contributions. Maxine Waters set up talks between Treasury Department officials and OneUnited Bank officials in 2008 so that the bank could plead for public funds.

Barack Obama is the president of the United States of America

Maxine Waters slammed President Barack Obama in August 2011, claiming that he was unsupportive of the black community. She also mentioned the high unemployment rate for African-Americans at the time, which was hovering around 15.9%. Waters took her criticism of Obama to a new level in October 2011, when she confronted the White House with racial concerns that it had worked hard to ignore.

Maxine Waters paid several visits to Fidel Castro, praising democracy and criticizing US efforts to depose him. She also urged that the US trade ban be lifted. Maxine Waters wrote Castro a letter in 1988, describing the 1960s and the next year as a horrible and sad period in history and thanking him for assisting her.

Waters voted for a Republican bill in 1988 to extradite convicted murderer Assata Shakur from Cuba. When Waters discovered that Shakur was listed under her prior name, Joanne Chesimard, she wrote Fidel Castro a letter pleading with him not to arrest him, claiming that many in the Black community believed her conviction to be fraudulent. After a lady drowned during an escape from Cuba to the United States in 1999, leaving a six-year-old kid, Elian Gonzales, Maxine Waters called on President Bill Clinton to send the boy back to Cuba.

Donald Trump is the president of the United States of America

On MSNBC’s All In with Chris Hayes in 2017, Maxine Waters claimed, “President Trump’s advisors who have oil or have ties to Russia and have an interest there are a bunch of scumbags.” Waters indicated in February 2017 that Donald Trump was putting himself in jeopardy owing to his conflicts, and that they have many suspicions that Trump is causing ‘chaos and divisiveness.’

“Trump has made it clear – it is now the White Supremacists’ House,” Maxine Waters texted on Twitter, linking President Donald Trump to the violence that erupted at a white nationalist protest march in Charlottesville, Virginia on August 12, 2017.

Maxine Waters declared in October 2017 that the US Congress had enough evidence against Donald Trump to’move on impeachment,’ referring to Russian connection claims during the 2016 Presidential election, and that Trump had ‘openly obstructed justice in front of our faces.’

Waters encouraged Trump to resign while attending the Time 100 Gala on April 24, 2018 “So that I won’t have to continue fighting for your impeachment because I don’t believe you deserve to be there. Simply leave.” Waters urged attendees at a rally in Los Angeles on June 23, 2018, to confront and harass Trump administration officials who show up in public places, following an incident in which White House Press Secretary Sarah Huckabee Sanders was asked to leave a restaurant. “Tell them they’re not welcome anymore, anywhere,” Waters said.

George H. W. Bush is a former president of the United States of America.

Maxine Waters spoke out against the United States’ involvement in the 2004 coup d’etat in Haiti. She led a delegation that included Sharon Hay-Webster, a Jamaican member of parliament, and Randall Robinson, the founder of the TransAfrica Forum, to meet with Haitian President Jean-Bertrand Aristide and transport him to Jamaica, where he would stay until May.

Lending on the Global Stage

HR 6796, or the “Stop Very Unscrupulous Loan Transfers from Underprivileged Countries to Rich Exploitive Funds Act,” was presented by Maxine Waters in August 2008.

Maxine Waters voted against the Iraq War Resolution, a 2002 congressional resolution that concluded and approved military action against Saddam Hussein’s regime. Waters has been a vocal opponent of the succeeding war and has advocated for a swift troop departure from Iraq. President George W. Bush was attempting to “set (Congress) up” in 2007, according to Waters, by asking cash for a “occupation” that is “sucking” the country of capital, other resources, and troops’ lives. Waters suggested that the economic resources being’squandered’ in Iraq could be used to provide universal health care or fully support President Bush’s own “No Child Left Behind” education law.

Maxine Waters has a net worth of $1 million dollars

Waters also has a Los Angeles house. The house  valued $4.3 million and  built on 6000 square feet. Maxine claimed $1.5 million in assets and $1.4 million in liabilities in her most recent wealth disclosure. Her property, which is valued between $1 and $4 million depending on the current real estate market and recent comparable sales, is her most precious possession.

The Personal Life of Maxine Waters

Maxine Waters had two marriages in her life. After graduating from high school, she married Edward Waters in 1956. They have two children together: Karen Waters, a daughter, and Edward Waters, a boy. In 1972, the couple divorced.

Sid Williams, a former American football linebacker in the National Football League, married Maxine Waters in 1997. Sid has suited up for the Baltimore Colts, Pittsburgh Steelers, Cleveland Browns, and Washington Redskins, among others. Williams is a former United States Ambassador to the Bahamas Commonwealth Waters was said to have announced her divorce from her spouse after he cheated on her in 2017. Her husband, on the other hand, disputed the charges, saying, “Several private investigators were looking into it, and that is what is happening at this time and location, and that is what is required to bring things to a suitable conclusionary stage.”

The pair has lived a nice life together since their marriage, however they do not have any children together. Waters’ children have a stepfather in Sid.

She received very significant death threats in 2018 after criticizing US President Donald Trump. “She said,” she explained.

“As the President continues to lie and falsely claim that I urged people to assault his fans, while simultaneously providing a veiled threat that I should ‘be careful,’ more people are leaving (threatening) comments and mailing angry mail to my office,” she said in a statement to CNN.

“On Monday, I received a very serious death threat from a person in Texas, which is why my planned speaking appearances in Texas and Alabama this weekend were canceled,” she wrote. “This is one of numerous very serious threats being investigated by the United States Capitol Police, in which persons threatened to shoot, lynch, or inflict me serious bodily injury.”

She canceled two engagements in Alabama and Texas as a result of the threats.