Megan Thee Stallion Got a Nose Job While She Was Losing Weight?

Megan Thee Stallion, who is best known for the song “WAP,” left her fans scratching their heads and wondering if she had undergone surgery when she shared this photo of herself. 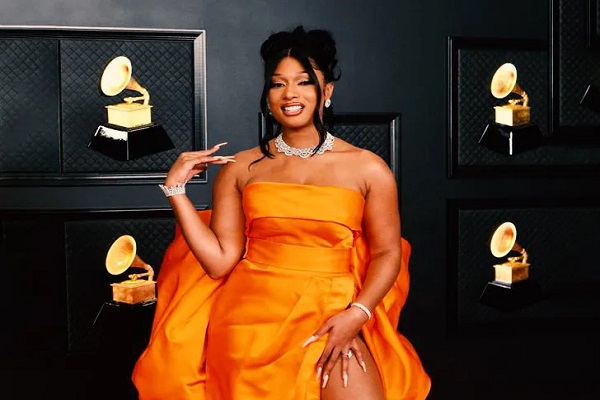 Megan Thee Stallion, a WAP hitmaker, left her fans perplexed when she shared this photo of herself in a nightclub on August 18, 2020. She had a different appearance than usual.

When eagle-eyed fans noticed that the rapper’s nose looked different, they assumed she had had nose surgery.

Stallion wore a shoulder-length turquoise-colored wig with a pearl hair clip and a matching tight crop top and shorts in the photos.
She wore a plethora of jewels and struck a pose with a stack of cash in her hands. It was difficult to miss the mustard yellow Birkin bag on the couch.

Stallion appeared to have had a rhinoplasty because her nose appeared to be smaller than before in the photos, according to fans.

A fan even put together a collage of her before and after surgery photos.
These allegations are nothing new to Stallion. Fans have long wondered if her curvy body is all-natural, but she revealed in a June 2019 interview with Hot 97 that she’s always been “comfortable” with herself and has never had cosmetic surgery.
People online, according to the Houston rapper, are constantly attacking her about her body. No one, however, has the courage to confront her about it face to face.

The Stallion is undergoing a physical transformation

Aside from her massively successful songs, the 26-year-old is also known for her enviable curves and 5’10” height. Her stage name “Stallion” was given to her because of her height.
“I’ve had the same body since I was a teenager, probably around 15 or 16. ‘Oh, you’re a stallion,’ older guys would always say “In 2017, she told Houstonia Magazine.

She used it as her primary Twitter handle for a while, and after that, everyone started calling her Stallion.

In mid-January 2021, the rap legend began her journey to a healthier body. “#HOTTIEBOOTCAMP” helped Stallion change her eating habits and develop a more intense workout routine.
It’s more of a health journey than a weight loss journey, according to her. She even invited her social media followers to join her on her fitness journey.

Stallion lost ten pounds in the first week thanks to one thing: hydration.

The rapper has been working out for nearly three months and is doing great. With her transformation photos, she provides motivation to her fans on a regular basis.

Related Posts of Megan Thee Stallion Got a Nose Job While She Was Losing Weight?