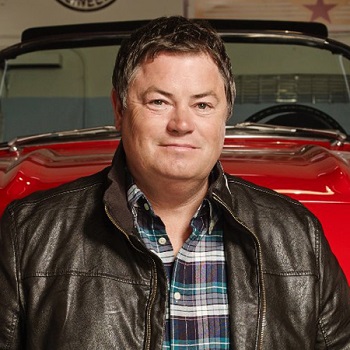 Mike Brewer is a well-known television presenter of motoring shows. He is currently the host of the international hit TV show ‘Wheeler Dealers.’ He previously hosted Channel 4’s Driven, Deals on Wheels, and Pulling Power.

Mike Brewer was born on August 28, 1964, in Lambeth, London, England. He is of British nationality and belongs to the Caucasian ethnic group. Roger Wilks and Doreen Fitzgerald have a son named Brewer. His father owned a Ford Popular known as the ‘Pinball Wizard.’ As a youth, he liked to alter vehicles, which helped Brewer discover his enthusiasm for driving.

Brewer began his hosting career in 1997 with the show Deals on Wheels. Soon after, he started presenting for Channel 4’s Driven, followed by Pulling Power, Auto Trader, Wrecks to Riches, and Revved-up. Brewer is currently a presenter for Wheeler Dealers alongside Ant Anstead. Since 2003, the show has shown on the Discovery Channel. Until the end of Series 13, he and Edd China hosted the show.

Wrecks to Riches, Pulling Power, Auto Trader, and Remote Madness have all featured Brewer as a host. He was named Best In Vision Personality by the Royal Television Society Midland Center. Brewer owns Mike Brewer Motors, which he created in 2012, in addition to hosting and presenting TV shows.

Mike Brewer has been married to his wife, Michelle, since 2002. Chloe, the couple’s daughter, was born to them. She is now pursuing a bachelor’s degree in fashion communication and promotion.

The couple first began dating in 1990 and decided to marry after more than a decade together. In March 2017, they celebrated their 15th wedding anniversary. “Happy Anniversary to my lovely wife, 28 years together 15 married,” Mike posted on his anniversary. They and their daughter are currently residing in London. Mike is very active on social media, with over 125k followers on Twitter.

According to Celebrity Net Worth, Mike Brewer has a net worth of roughly $1.5 million as a result of his TV career and a car dealership. In their first year, Brewer and his former co-host Edd bought six cars and spent $8620.35 on repairs. All of the automobiles were sold for $10,723.44. Their initial trade did not yield much profit, as they only made $1,518. However, they made a total profit of $341205.15, with an average profit of 2,819.17 per vehicle.