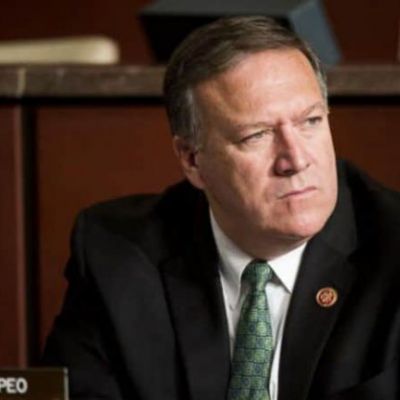 Mike Pompeo is an American lawyer and politician best known as the current Secretary of State of the United States, a position he has held since April 2018. Mike is also well-known for being a former US Army officer, a member of the US House of Representatives, and a former Director of the Central Intelligence Agency (CIA).

Michael Richard Pompeo was born on December 30, 1963, in Orange County, California, USA, under the sign of Capricorn to Wayne and Dorothy Pompeo. Mike is of white ethnicity and is of American nationality. He is also of Italian origin from his father’s side. Further information regarding his family’s history is not publicly available.

Mike attended Los Amigos High School in Fountain Valley, California, after finishing his elementary schooling, and graduated in 1982. During his high school years, he excelled in athletics, particularly basketball, where he played as the power forward for his high school squad. He continued his studies by enrolling at the United States Military Academy at West Point, where he graduated first in class in 1986 with a Bachelor of Science degree in engineering management.

Mike Pompeo attended at Harvard Law School in the early 1990s and obtained his Juris Doctorate in 1994. During his studies, he was also the editor of the Harvard Journal of Law & Public Policy and a member of the Harvard Law Review’s board of directors.

Mike joined the US Army in 1986 as an Armor Branch Officer in the 2nd Squadron of the 7th Cavalry Regiment of the 4th Infantry Division. After five years of service, he departed the Army with the rank of Captain in 1991.

Pompeo began his professional career as a lawyer at the Williams and Connolly LLP litigation company in Washington D.C. after receiving his Juris Doctorate in 1994. After four years of perfecting his legal talents, Mike chose to leave the legal profession and pursue his entrepreneurial dreams in 1998. Mike Pompeo moved to Wichita, Kansas, where he joined three West Point friends, Ulrich Brechbuhl, Brian Bulatao, and Michael Stradinger, in the aerospace business.

They founded Thayer Aerospace LLC after acquiring aircraft-part-manufacturing companies such as Precision Profiling, Aero Machine, B&B Machine, and Advance Tool & Die. Over the next decade, Pompeo’s company worked with several major aerospace companies, including Boeing, Cessna Aircraft Company, and Gulfstream Aerospace, to mention a few. Mike Pompeo sold his stake in Thayer Aerospace to Highland Capital Management in 2006, and the company was renamed Nex-Tech Aerospace.

Before entering politics, Mike was the president of Sentry International, an oilfield equipment manufacturing company.
Pompeo was elected to the 4th District Congressional seat as a Republican Party member during the 2010 Kansas Republican primary, receiving 59% of the votes – he managed to keep his position in the US House of Representatives as he was re-elected three times in a row, in 2012, 2014, and eventually in 2016. Mike previously served on the House Committee on Energy and Commerce, the House Permanent Select Committee on Intelligence, and the Congressional Constitution Caucus.

Have you ever wondered how much money this 54-year-old American politician has amassed? How wealthy is Mike Pompeo? Mike Pompeo’s net worth is estimated to be above $650,000 by credible sources as of mid-2018. It has all come through his political career, as well as his previous pursuits in the aerospace sector, law, and Army duty.

Mike is a married man who has married twice! He is married to Susan, and they have a kid named Nicholas. They are both members of the Evangelical Presbyterian Church, where Mike is also a deacon. Pompeo had previously married Leslie Libert in 1986.

Mike has an average frame and stands 5′ 11″ tall (1.81 m). He is active on social media platforms such as Twitter, where his official account – @SecPompeo – has over 276,000 followers. He is also active on Instagram, where he has about 8,000 followers.