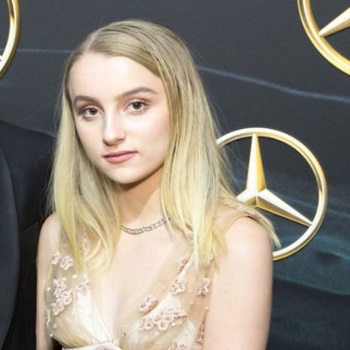 Skeet Ulrich and his first wife Georgina Cates have a daughter, Naiia Rose Ulrich, an English actress. Aside from her parents’ celebrity, Naiia made a name for herself in the performing industry with her role in the 2010 comedy-drama Due Date. Her other acting credits include The Girl on the Roof, Je Suis Ici, and Mina Tobias: Shoes, all short films.

Has a Twin Brother and comes from a family of actors.

Naiia Ulrich was born on March 9, 2001, in England, United Kingdom; she is of mixed ancestry and possesses an English nationality. Skeet Ulrich, her father, is an American actor of German, English, Irish, and French ancestry, and Georgina Cates, her mother, is an English film and television actress.

Ulrich’s parents met at an Academy Awards celebration and married on October 5, 1997, in Madison County, Virginia, according to reports. Skeet and Georgina split in 2005 after 8 years of marriage, citing irreconcilable reasons. Naiia’s father married second wife Amelia Jackson-Gray in 2012, but the couple divorced in 2015, and he was previously engaged to model Rose Costa (2016-2017).

Despite these realities, she and her father have a wonderful relationship.

Ulrich made her acting debut at the age of nine in the 2010 film Due Date, in which she played Alex alongside Robert Downey Jr., Zach Galifianakis, Michelle Monaghan, Juliette Lewis, and Jamie Foxx. The film was a commercial triumph, grossing $211.8 million over its $65 million budget at the box office.

Following an eight-year sabbatical, Naiia appeared in two short films in 2018: Lila in The Girl on the Roof and Lindsey in Je Suis Ici. She starred in the short film Mina Tobias: Shoes in 2019.

Naiia Ulrich Is Currently Dating: Who Is Her Boyfriend?

The 19-year-old actress is dating and frequently mentions her partner on Instagram (@naiia). She is most known for her role in Due Date. Stutz Elliot, Naiia’s boyfriend, has an Instagram account with the handle @stutzelliott. Despite the fact that the couple has yet to reveal how their relationship began, they have been dating for over a year.

On the occasion of their anniversary, Stutz uploaded an Instagram photo showcasing and dedicated to Naiia Ulrich on September 16, 2020.

Ulrich and her boyfriend currently reside in Los Angeles. Naiia is an active Instagram account with approximately 76.7K followers as of October 2020.

Acting is Naiia Ulrich’s primary source of income, and she reportedly has a net worth of $500,000 as of October 2020. According to Celebrity Net Worth, her father Skeet Ulrich has a net worth of $5 million. Skeet presently works in Riverdale after appearing in films like Scream and The Craft, as well as TV shows such as Law & Order: LA and Jericho (2017- Present).